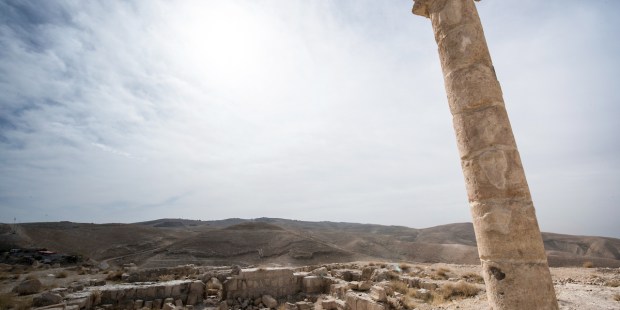 Jeffrey Bruno | JTB | Aleteia
The view from what remains of the Royal Palace at Machaerus, the site where Salome danced for King Herod and John the Baptist was beheaded.
Share
Print
J-P Mauro - published on 09/19/20

Archaeological drawings based on the site where it is believed St. John the Baptist was executed influenced the set design.

After many months of canceled shows due to the world pandemic, the Hungarian State Opera company has resumed its season with a new production of Richard Strauss’ epic drama Salome. The opera has been enjoyed for over 100 years, but this iteration is unique, as the Hungarian State Opera house has based its set design on archaeological reproductions of King Herod’s palace, Machaerus, where the biblical events took place.

Based on the play of the same name by Oscar Wilde, Salome follows (but greatly embroiders) the biblical narrative of the execution of St. John the Baptist. After Salome moves through the seductive “Dance of the Seven Veils,” King Herod Antipas is so taken with the young girl that he offers to fulfill any desire in her heart. Salome asks for the head of the prophet on a silver platter, which King Herod delivers. The Hungarian State Opera describes the work on their website:

This synopsis does little justice to the music of the opera, which contains some of the most memorable melodies Strauss ever wrote. “The Dance of the Seven Veils,” for example, jarred audiences at first, with an oboe producing distinctly Middle Eastern tones to accompany the dancing girl, giving the dance a bit of a snake-charmer feel. When it was written in the late 19th century, Salome was considered one of the most scandalous shows ever staged, due to the sensual nature of this seductive dance.

The Hungarian State Opera went on to note that the set’s reproduction of the wall of Herod’s palace comes thanks to Győző Vörös, head of the Hungarian Academy of Arts research group, who has conducted excavations at Machaerus. Architect Tamás Dobrosi worked with drawings developed by the archaeologist to reproduce a portion of the vanished palace. This production marks the first time that the work of an archaeologist and an architect has helped to present, in a cultural setting, the actual location of the opera’s events.

The architectural space encircled by a Doric colonnade is an open cross-section of Herod’s royal palace and takes the stage in a compact form. The architectural area formed by the apsis of the royal throne is an important element of the visuals. The Doric columns and the cornice they support are used in a 1:1 scale for the set.

The company had only intended on one performance, but it was so well received that they were invited to the Janáček Brno 2020 international music and opera festival, where they will put on an encore performance at the Janáček Theatre, on October 10, 2020.