Saints who dealt with extreme weather 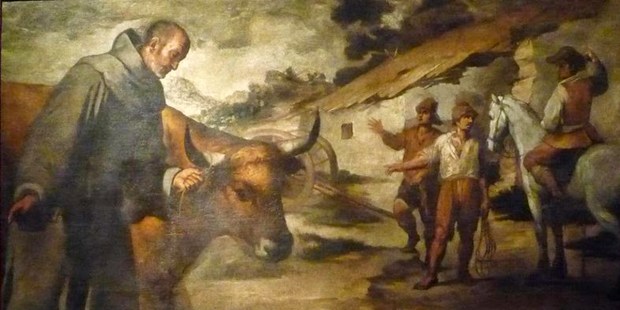 God has a way of making his presence felt, even (or especially) in the midst of storms.

During one of the most active hurricane seasons on record, many people around the world are keeping an eye on the weather, wondering if they will have to evacuate (again) and what they’ll have to come home to. The saints, too, dealt with extreme weather, both navigating the perils of fierce storms and praying for miraculous rainfall. As you ride out hurricane season, turn to these saints who survived extreme storms, including hurricanes or typhoons, or prayed (successfully) for the weather they needed. Through their intercession, may God protect us and grant us courage and strength.

St. Scholastica (480-543) is, perhaps, not the greatest consolation for those who feel helpless while looking at hurricane projections. The sister of St. Benedict, she was enjoying her annual visit with him when he began making ready to leave. She begged him to stay with her, but Benedict insisted that he had to return to his abbey to follow his Rule. So Scholastica began to pray and a deluge began, preventing Benedict from leaving. They spent one last night together; three days later, Scholastica died; her brother found himself grateful for the power of her prayers to direct the weather, even if it was against his will.

St. Francis Solanus (1549-1610) was a Spanish Franciscan priest and missionary to South America. While aboard a ship sailing for Peru, Fr. Francis took the opportunity to speak words of hope and love to the enslaved people who were being transported like cargo. When a strong storm flung the ship against a rocky coast, the captain and crew abandoned the enslaved people, leaving them to die in a watery grave. Fr. Francis refused his place in the life boat, staying to baptize the captives as the boat split apart. He helped as many to safety as possible, waiting with them and praying with them for three days until, against all odds, they were rescued. He spent the next 20 years working with indigenous people in Peru and speaking out against the colonists’ abuses.

Read more:
The heroic nuns who lost their lives in the Galveston hurricane of 1900

Bl. Peter Kibe (1587-1639) was a Japanese Christian who felt called to be a Jesuit priest. It took 14 years of perseverance (and a 3,700-mile walk) for him to convince a bishop to ordain him, then another eight years of travel before he was able to return to his native Japan. On the very last leg of the journey, Fr. Kibe built a ship in Manila after he was unable to find anyone who was willing to carry a Christian to Japan. He and his companions embarked on a thousand-mile journey across Philippine Sea—in the middle of typhoon season. Their ramshackle boat was barely seaworthy, and certainly unprepared to shelter them during the typhoon that hit when they had almost reached their destination. Fr. Kibe and his crew were shipwrecked, but every one of them survived to discover that they had been driven ashore off the coast of Kagoshima, right where St. Francis Xavier had landed when first announcing the Gospel to Japan. Fr. Kibe finally arrived in Japan and served as a priest for eight years before being captured and killed.

St. Joseph Vaz (1651-1711) was an Indian priest (the son of an Indian woman and a Portuguese man) who served for many years in Sri Lanka. In the areas of the island controlled by Calvinists, Catholicism was strictly forbidden. His priestly identity largely concealed by his ethnicity, Fr. Joseph begged from door to door with a rosary around his neck, drawing out covert Catholics while deceiving the Dutch. When he was captured by the king of Kandy, a small kingdom on the island, he demonstrated the power of God by praying for rain to end a drought. Immediately, it began to pour—everywhere but over Fr. Joseph, who remained entirely dry. Suitably impressed, the king gave him free run of the kingdom, to evangelize as he saw fit.

Read more:
For those in the path of Hurricanes: A prayer for sheltering from storms

Bl. Giovanni Battista Mazzucconi (1826-1855) was an Italian priest and missionary to Papua New Guinea. He contracted malaria while preaching the Gospel to the native people; in his weakened state, he was sent to Sydney for treatment. But on the journey, a tropical cyclone struck on Wednesday of Holy Week, ripping the sails and breaking the mast of the ship. The passengers and crew were driven by wild winds for four days, until Easter Sunday dawned and they were greeted by clear skies. A few months later, Fr. Giovanni Battista was preparing to board another ship, bound for Papua New Guinea. He wrote a letter in which he said, “Well, that God who saved me then will be with me again in this journey.” He was right, but not as he expected. When his ship landed, the young priest was greeted by a leader of the people he had attempted to evangelize; the man reached out to Fr. Giovanni in friendship but struck him with a concealed weapon and killed him.