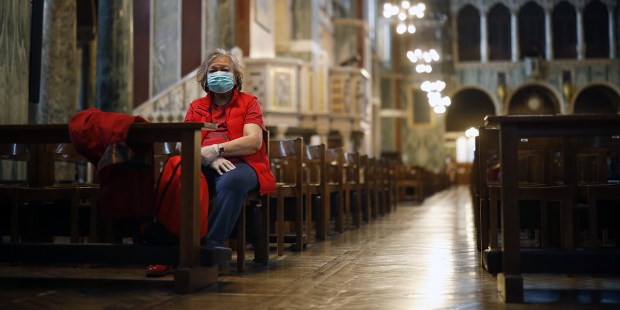 While the city opens access to shopping malls and restaurants, the vast majority of religious congregants are denied the right to practice their faith.

“I never expected that the most basic religious freedom, the right to worship — protected so robustly in our Constitution’s First Amendment — would be unjustly repressed by an American government,” Archbishop Salvatore Cordileone wrote in the Washington Post just this week.

Already in San Francisco shopping malls are permitted to operate at 25% capacity. Restaurants have been opened for outdoor dining.

Meanwhile, Churches are permitted a mere 12-person congregation outdoors. The city of San Francisco plans to increase the sanctioned number of congregants to a mere 50 parishioners outdoors and 25 indoors starting October 1.

Archbishop Cordileone has stated that 25 parishioners is less than 1 percent of the capacity of San Francisco’s St. Mary Cathedral. How are these inordinate restrictions going to ever meet the needs of the hundreds of thousands of Catholics in San Francisco?

The simple fact is that the City of San Francisco has decided religious worship is not a necessary activity.

Archdiocesan officials do not deny the real risks to physical health posed by the novel Coronavirus. Archbishop Cordileone writes,

“We Catholics are not indifferent to the very real dangers posed by Covid-19. This is one of the reasons Catholic churches have developed rigorous protocols to protect public health in our facilities. We submitted our safety plans to the city in May along with other faith communities, and while indoor retailers had their plans approved and went into operation, we are still waiting to hear back.”

To allow other services and amenities to operate under such circumstances, while at the same time imposing more rigorous and restrictive sanctions against religious gatherings, directly assaults the American commitment to religious liberty. By diligently following reasonable precautions, parishioners can safely gather to celebrate the sacraments and render what is due to Almighty God.

One cause of the present public debate is a disagreement about the idea of the common good of society. The Catholic theological tradition, since at least the time of Saint Thomas Aquinas (d. 1274), has argued that the fundamental and inherent dignity of the human person means that citizens serve the common good of all members of society.

The common good, however, is not simply a utilitarian metric measured by statistics which indicate the greatest good for the highest number of people. Serving the common good is a broad concept which includes humanity’s duty to worship God (the source of life and dignity) and other things necessary for human flourishing. The COVID-19 pandemic presents a serious threat to physical health. But physical health is only one aspect of the common good.

Religious freedom must be respected for the sake of the common good and the flourishing of society. Archbishop Wenski, Chairman of the USCCB Committee on Religious Liberty, has insisted,

“The right to religious freedom has its foundation in the very dignity of the human person. Religious freedom is the human right that guarantees all other rights — peace and creative living together will only be possible if freedom of religion is fully respected.”

In a time when the value and dignity of every American needs to be boldly and unconditionally asserted, it must be made known that the condition of religious freedom is absolutely necessary for such conversation and dialogue to unfold.

Today, September 20, Archbishop Cordileone has called for Eucharistic processions, which will begin at three parishes in San Francisco, meeting at UN Plaza by City Hall. Archbishop Cordileone insists, “Our people need to know that the Mass can be offered safely and that we want to be their advocates.” We pray that this peaceful and safe demonstration will bring about a welcome return to public worship in San Francisco.