The keys to raising a large, happy family, by quarterback Philip Rivers

The dad of nine and his wife Tiffany have a great approach to their marriage and family life.

The news is often awash with celebrity couples divorcing and the misery that follows such a process. So it’s lovely to hear of how a well-known couple have not just managed to stick to their vows, but are doing so while raising a large family in faith and love.

Philip Rivers, the quarterback for the Colts, has not shied away from sharing his Catholic faith with the public — in fact, we’ve already talked about the meaning of his favorite faith-filled baseball cap that he often wears at press conferences. And recently, Rivers gave an interview, reported on Indystar, that sheds more light on the man off the football field and gives a little insight into how the Rivers family is a dream team in itself.

With the birth of Philip Rivers' ninth child, here's one of my favorite stories I've ever written.

A Family Affair: A Look at Philip Rivers Through the Eyes of his Children

Rivers met his wife, Tiffany, while in high school, and they actually wed after he finished his freshman year of college. While he was at college taking classes and playing football, Tiffany supported the couple financially through her work at a daycare center.

From the beginning the couple had the same attitude about the number of kids they would welcome: “I think really, it was just whatever God’s will was. We were just open. Certainly didn’t have a number on it. Still don’t.” So who knows? With nine Rivers kids, perhaps they’ll go on to beat Philip’s mom and grandfather, who were both from families of nine siblings.

In a household that could be a little chaotic, Rivers puts its success down to something most simple but not always easy to attain: “Our relationship is key, too, in raising a big family, because we were best friends first.”

Admirably, the couple also recognize each other’s role in the family, and perhaps what makes it work so well: “My wife, she always says I’m the head and she’s the heart.”

Rivers also believes that one of the most important things about raising a family is giving children your time. While this isn’t easy for lots of busy parents when they have many other commitments to honor, the Riverses seem to manage through understanding the restraints of life as a football family.

When it’s off-season, Rivers gives his absolute all and gets involved in all aspects of family life. When football season kicks in, Tiffany shows tremendous strength that leaves her husband full of admiration. But as Rivers shares: “It’s funny, because I don’t feel the stress, but mentally, physically, it can be wearing on the whole house, in general.”

Yet among all the demands of the football season, Rivers does ensure he sits down for a family meal at least twice a week, taking the time to listen to his kids and understand what’s going on in their hearts.

The couple seems to have identified each other’s unique skill set and talents to bring out the best in the children. As devout Catholics the couple is “raising their children to know, love and serve God, and to love others, to love their family, to lead their siblings, to look out for them.” and with this level of unity there’s also the acknowledgment that each child is an individual in this busy family of 11.

Rivers sums it up beautifully, there’s “one in college, one in high school, and then an 8th grader, 6th grader, 5th grader, 3rd grader, 1st grader, preschooler, the little baby: the dynamics are different with all of them. They’re all awesome in their own unique way.”

If you’d like to read more about the Rivers family, just click on the original article here.

There are many celebrities who’ve been inspired by growing up in large families. Just click on the slideshow below to learn a little more: 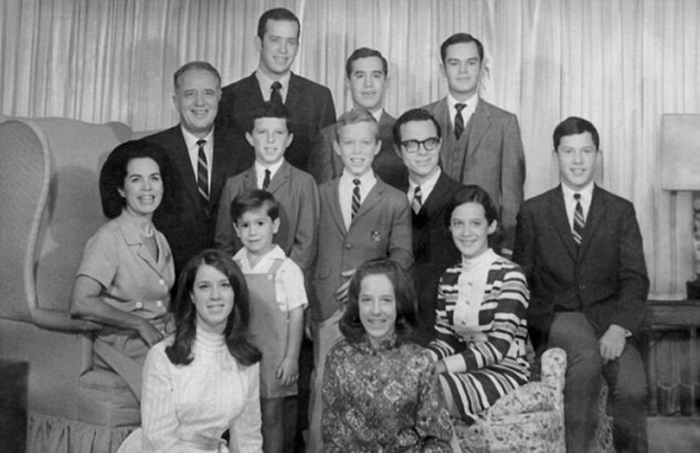 Read more:
10 Things that make having a large family so fulfilling