Attacks on churches continue, leaving a majority of Catholics concerned, according to poll 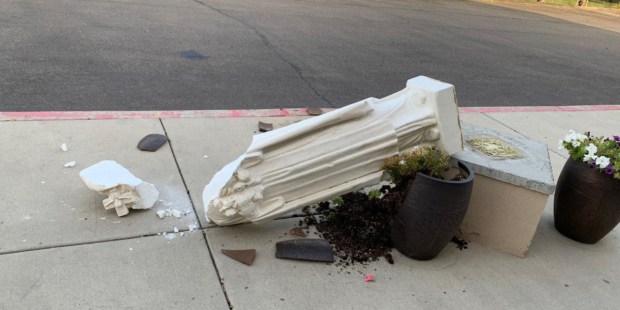 Catholic and Protestant churches burned or broken into, according to reports from around the U.S.

The vast majority of Catholics who are likely to vote in the November elections are concerned about recent anti-religious actions and violence, including church desecrations.

“By a seven to one margin (83% to 12%), the overwhelming majority of Catholic likely voters expressed concern about vandalism and attacks on churches,” according to EWTN News, which conducted the poll with Real Clear Opinion Research. “More than three-quarters of Catholics (78%) and an even greater number of those who attend Mass at least weekly (83%) expressed concern about the anti-Christian elements of the recent protests [concerning racial injustice], only 11% disagreed.

“And by more than three to one (74% to 21%), most said they were concerned about attacks on statues of Catholic heroes including Christopher Columbus and St. Junipero Serra,” the article continued.

The same day the results of the survey were reported, a Florida TV station showed surveillance video of a man setting fire to a Catholic church near Tampa. Security cameras captured images of a man breaking into Incarnation Catholic Church in Town ‘n’ Country last Friday night, dousing several pews with a flammable liquid and setting them alight. Authorities are investigating. Sheriff Chad Chronister said they were unsure of a motive.

Meanwhile, the Knights of Columbus donated $10,000 to a Brooklyn, N.Y., church to help the parish recover from vandalism that occurred earlier this month. Supreme Knight Carl Anderson directed the gift in solidarity with Our Lady of Solace Church after parishioners were stunned by the desecration of a beloved statue of Our Lady of Guadalupe.

“The desecration of our Catholic statues and churches is a grievous crime against all people who value religious freedom,” Anderson said. “Together with Pope Francis, our bishops and faithful everywhere, we stand against violence, hatred and bigotry.”

A security camera captured the Sept. 11 assault on the statue, whose base was damaged along with the face, hands and veil on the figure of the Virgin Mary. Video shows a man throwing the statue onto the sidewalk in front of the church.

But Catholic churches were not the only ones being vandalized in the recent spate of attacks. Three of the six churches in the town of Pelzer, South Carolina, were vandalized late last week, according to WYFF-TV, quoting city officials.

“We don’t know who did it, but how truly despicable of a thing to do to attack a town’s churches,” said Ragland. “Pelzer is a small close-knit community full of caring neighbors, many of whom have lived here their whole lives and have attended these churches for generations, and so to do something like this, we just can’t understand it.”