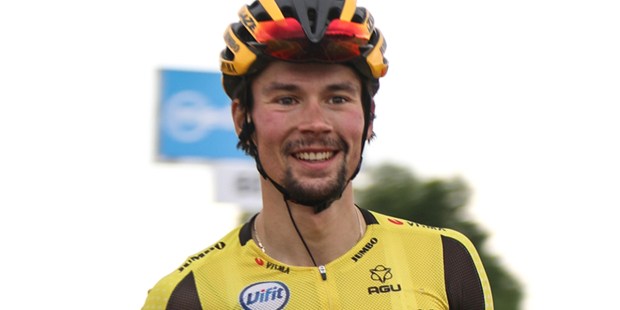 During this year’s Tour de France, Tadej Pogačar and Primož Roglič made Slovenians and other sports enthusiasts around the world incredibly happy. Roglič had been a star throughout the famous three-week cycling race, and even though he missed the big win in the end, it needs to be stressed that his sporting career so far has been absolutely incredible.

Cycling is actually Roglič’s second sport. When he was younger, this boy from the little town of Kisovec in central Slovenia was an aspiring ski jumper. In 2006 he won the title of the World Junior Vice Champions with the Slovenian ski jumping team. A year later, the young Slovenian ski jumpers beat the world’s elite at the 90-meter ski jump in Planica, the famous Slovenian Nordic center.

In addition to then-17-year-old Roglič, the winning team included Jurij Tepeš, Mitja Mežnar and Robert Hrgota, all of whom have spoken about their happy memories of Roglič.

JURIJ TEPEŠ: “Primož has always been the same – a kind and simple boy. His results tell their own story. Hard work is needed in order to achieve that. Regardless of the talent you cannot succeed without hard work. Once Primoz makes up his mind to something there is no stopping him. He was like that while ski jumping and he is the same while cycling.

There is a great saying in Slovenian: still waters run deep. This is Primož – still waters. From him we can learn that anything is possible. Of course, each of us has his his own limitations. But if we really make up our mind to something we can overcome so many obstacles. Many sacrifices are required for that, obviously, setting priorities and eliminating certain desires.”

ROBERT HRGOTA: “Primož sets his ideas and goals at the beginning of the task, he follows his abilities and never tries to find any excuses. As ‘little rascals’ we got along splendidly, we went to secondary school together, those were lovely times. I am glad to have lived through my teenage years with these boys.”

MITJA MEŽNAR: “We were a proper team. But Primož’ success after going into cycling has been absolutely incredible, inconceivable. He had always liked running but as ski jumpers we were not allowed to cycle then. He always did everything he was told and more.

Slovenia is such a small country but we have so many top athletes. Apparently there is a will. Athletes can be enormous role models for people: when you are going through hard times think of someone else who may have had it even worse but got through it and succeeded.”

Grateful for all the experience

After winning the world junior championship title in 2007,  that very same month Primož Roglič experienced the worst nightmare of ski jumpers. He had a bad fall at the ski jump in Planica; he was unconscious for 10 minutes. He suffered a serious concussion and a broken nose. From an interview in the publication Siol:

“I would not say today that this fall has been decisive for my sporting career,” Roglič used to say for a decade after this scary accident: “I went on ski jumping for at least four more years. I firmly believed that I would succeed somehow. Looking back I am grateful for all the experience I got while ski jumping, and for getting ‘a second chance’ as a cyclist. The old and the new sport have something in common though; I have learnt that regardless of the severity of the fall one has to get up and go on.”

Milestone after milestone and a cross on the right arm

He did not give up ski jumping straight away, but in 2012, after a few mediocre seasons and injuries, he waved goodbye to the sport. At the age of 21 he bought his first “serious” bicycle and started as an amateur cyclist, later joining a professional cycling team in Slovenia.

He went on to set new milestones. In 2016, he won his first stage at Giro d’Italia, a year later at Tour de France. The latter saw him come fourth in final general classification in 2018, and he was the first Slovenian in history to win La Vuelta, the Spanish Grand Tour. In 2019 Roglič got his lifetime achievement award – he became a father.

The sign of the cross before starting the race at Tour de France.