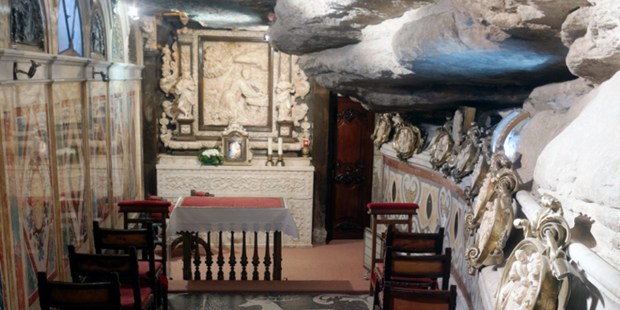 It’s the place where St. Ignatius, the founder of the religious order that Francis belongs to, wrote his most legendary gift to the Church.

A delegation of Spanish bishops in Rome this week encouraged Pope Francis to visit their country, specifically the city of Manresa in Catalonia. The pope has a special tie to the place, because it is there that his spiritual father wrote his enduring gift to the Church: the retreat points known as the spiritual exercises. St. Ignatius of Loyola, founder of the Society of Jesus (also known as the Jesuits), the pope’s religious order, discovered his vocation there.

As the cradle of the Jesuit order, the city is now the destination of what is being promoted as the “Ignatian Way”—the path traveled by St. Ignatius from the city of Loyola (in north-central Spain) to Manresa.

The Holy Father, who undoubtedly would be delighted to visit the shrine, said that any possible visit will depend on his own health, and of course, the evolution of the COVID pandemic.

The three Spanish bishops — who are the current leaders of the Spanish episcopal conference — spent an hour and a half with the Bishop of Rome, after previously meeting with his secretary of state.

But their conversation was marked by darker themes than a pilgrimage in the footsteps of St. Ignatius. The Spanish Senate is set to debate a euthanasia bill, which would make Spain the fourth European country to legalize the measure, after Belgium, the Netherlands and Luxembourg.

The bishops of Spain have been vocal in their opposition of the measure, releasing a statement earlier this month.

As well, the Vatican just released on September 22 a lengthy document from the doctrinal office, advocating care for the terminally ill and discussing the errors of euthanasia in relation to the Parable of the Good Samaritan.

Read more:
New Vatican document addresses euthanasia: All have right to be loved

The Holy Father has often spoken out about euthanasia, warning that much of the push for the measure has to do with dollar signs. He’s said:

The practice of euthanasia, which has already become legal in several states, only seemingly aims to encourage personal freedom; in reality it is based on a utilitarian view of the person, who becomes useless or can be equated to a cost, if from the medical point of view he or she has no hope of improvement or can no longer avoid pain.

The pope urged the Spanish bishops to be close to all those who suffer — COVID patients, migrants, and others — and to consider the issue of euthanasia in this same perspective.

According to Cardinal Juan Jose Omella of Barcelona, the pontiff’s concern is about supporting people and accompanying them in their pain, and is more than a question of “dying or not dying.”

If passed, the option for assisted dying would become part of Spain’s public health care.

Read more:
Catholic, Jewish, and Muslim leaders unite in opposition to physician-assisted suicide and other forms of euthanasia