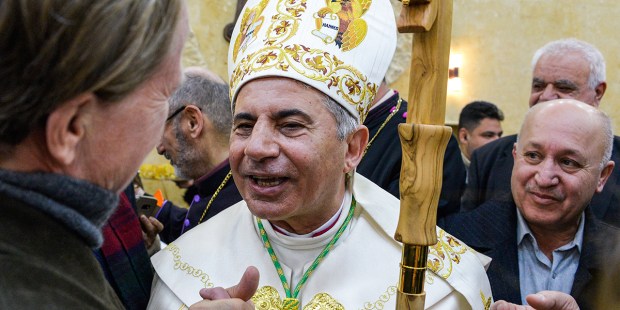 The Chaldean Catholic prelate saved thousands of historic documents during the Islamic State’s attack on Mosul in 2014.

Chaldean Archbishop Najib Mikhael Moussa, of Mosul, has been nominated for a prestigious award from the European Union for his preservation efforts. which saw thousands of important historical documents saved from the Islamic State’s invasion of Mosul in 2014. The 2020 Sakharov Prize for Freedom of Thought is bestowed on individuals and groups who show dedication to the defense of human rights and the freedom of thought.

Mgr Najeeb Moussa Michaeel, Archbishop of Mosul, ensured the evacuation of Christians, Syriacs and Chaldeans to Iraqi Kurdistan and safeguarded more than 800 historic manuscripts dating from the 13th to the 19th century. These manuscripts were later digitized and exhibited in France and Italy. Since 1990 he has contributed to safeguarding 8,000 more manuscripts and 35,000 documents from the Eastern Church.

According to Catholic News Service, Archbishop Moussa, who was a priest during the 2014 attack, jumped into action when the battle was lost and the Kurdish forces were in retreat, organizing a small group to load up two flatbed trucks with approximately 1,300 valuable yet fragile manuscripts. The quick-thinking priest let the trucks go on without him, preferring to remain with his people as they made a 40-mile trek through the summer heat to reach the Kurdish capital.

Read more:
The Fall of Mosul

In an interview with AsiaNews, Archbishop Moussa recalled the moment when he was in dire need of assistance in his efforts to preserve the documents, important to the cultural history of his people. As he explained, he prayed to God for help and it was promptly delivered:

“To save the manuscripts and people during the advance of Islamic State forces, many feet and many hands were needed. At that time, I called on God to have ten feet and ten hands to save books and people, and he replied by sending me many young people who helped me in this mission.”

Archbishop Moussa called the nomination an honor to his people and “the innocent victims, especially the Yazidis, a peaceful people who had to face a real tragedy.” He commented:

“We need true peace in order to continue living as a community based on the principle of citizenship, overcoming barriers of race, religion, ethnicity … This is the only viable solution for the future.”