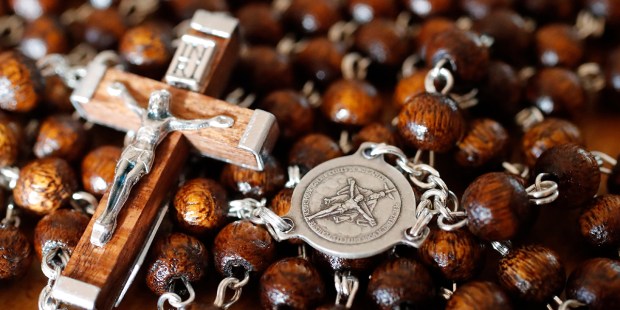 The mentally ill man turned himself in immediately following the crime.

On September 19, 2020, Cardinal Konrad Krajewski, the Papal Almoner, concelebrated the Memorial Mass at the Cathedral of Como (Italy) for Fr. Roberto Malgesini, an Italian priest who was murdered on September 15 by a poor person he had helped.

In the name of Pope Francis, the cardinal asked that a rosary be given to the “unfortunate man who killed him and who is in prison” as well as to each person present at the celebration, reported the Italian newspaper Avvenire that same day.

The killer is said to suffer from mental illness, and is known by locals due to his behaviors. He turned himself in immediately after the crime, and confessed.

“Fr. Roberto’s sacrifice is a sacrifice of love that offers the Church and all of society the possibility of extraordinary and unimaginable fruitfulness, which all of us have the duty to develop with evangelical courage and determination,” said Bishop Oscar Cantoni of Como in his homily.

Fr. Roberto, he added, was not only a “martyr of charity,” but also a “martyr of mercy,” with a gentle and reserved style, who made himself “weak with the weak, poor with the poor.”

Fr. Malgesini is only one of a great untold number who risk their lives to help those in need. In this week’s issue, the Italian newspaper Famiglia Cristiana devoted a detailed report to Fr. Antonio Coluccia, a 45-year-old priest who is evangelizing one of Rome’s most dangerous suburbs: San Basilio.

His mantra: “fight against drugs with prayer as the only weapon.”