Replica of Pope Francis’ sculpture of migrants and refugees to be unveiled in Washington, DC 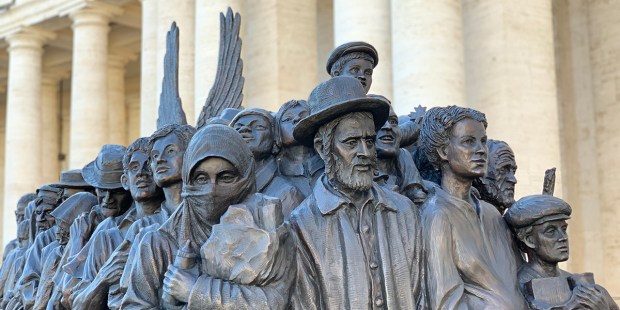 The copy of “Angels Unawares” will be permanently installed near the National Basilica.

Last year, on the occasion of the 2019 World Day of Migrants and Refugees, Pope Francis unveiled the  life-sized sculpture “Angles Unawares,” which depicted the plight of immigrants and refugees over the course of history.

Washington Archbishop Wilton D. Gregory will unveil and bless the sculpture tomorrow, Sunday, September 27, and will be joined by Archbishop Christophe Pierre, Apostolic Nuncio to the United Sates.

The unveiling and celebration can be viewed here:

The sculpture was created by Canadian artist Timothy Schmalz, who is known for his bronze sculptures of “Homeless Jesus,” which depict Christ sleeping on a park bench, and which have been installed in churches all over the world. In 2016, the Vatican commissioned Schmalz to create a sculpture to honor refugees and migrants.

Schmalz, who describes himself as a “hard core Christian” explains on his website that in creating the work he was inspired by Hebrews 13:2: “Do not neglect to show hospitality to strangers, for thereby some have entertained angels unawares.”

The sculpture depicts 140 migrants traveling together on a boat, including representatives of Jews fleeing Nazi German, Syrian refugees, Poles escaping Communism, and Syrians and Africans fleeing war, according to a Crux interview with the artist last year.

The theme for the 106th World Day is “Like Jesus Christ, forced to flee. Welcoming, protecting, promoting and integrating internally displaced persons.”

Cardinal Michael Czerny S.J., Under-secretary of the Migrants & Refugees Section, explained that due to the challenges caused by the ongoing pandemic, the Holy Father’s Message this year embraces internally displaced persons, and also the many people everywhere who are experiencing situations of precariousness, abandonment, marginalization and rejection as a result of COVID-19.