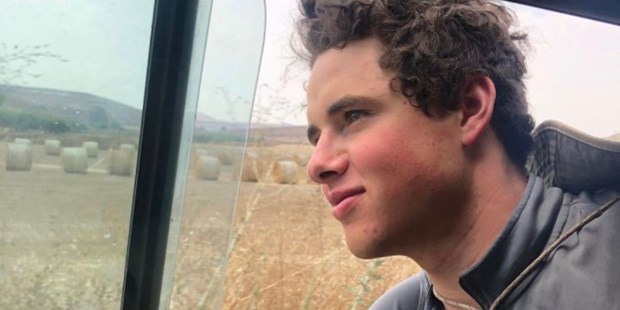 Isaac Scharbach’s faith, virtue, and talent were already apparent, but the extent of it all is becoming more widely known.

Today, Isaac Ian Scharbach would have turned 22, but on August 1 he was tragically killed while cycling near his family home in Maryland. In the days that have followed, what family and friends have revealed about Isaac — his virtue, his spiritual depth, his love of life and devotion to others — has been inspiring many far and wide. What began when he was here has continued after his death. His incredible life is an example for all of us, young and not so young.

Isaac is the second child and eldest son of Fr. Albert Scharbach, a former Anglican priest who was ordained in the Catholic Church seven years ago and is now pastor of Mount Calvary Catholic Church in downtown Baltimore, and Abby Scharbach, who works at the GIVEN Institute and heads up ministries at their parish as well as homeschooling some of their children.

Isaac has eight siblings and took his brotherly role to heart, developing a close relationship with each of them. As his father shared in an interview in The Catholic Review, Isaac had a “seemingly irreplaceable role in our family, where he served as the primary balm who could soften, inspire, and encourage each of us. But I know God wouldn’t take someone so devoted to him unless there was a great blessing intended.”

It was with this belief that Fr. Scharbach was able to celebrate his own son’s funeral Mass on the feast of the Transfiguration, just a few days after Isaac’s passing. His moving homily can be read and watched here.

While Isaac loved his family dearly, it was his incredible faith, service to others, and love of beauty that makes him an unusual young adult worthy of emulation.

Although it isn’t common for modern teenage boys, Isaac kept a spiritual journal throughout his high school years that provides some insight into his faith and the remarkable person he was. (At that time, he was also considering religious life.) His father has shared some of the entries that Isaac wrote when he was a teen, and wrote this of Isaac in a recent Facebook entry:

“Anyone who knew Isaac could speak of his great exuberance for life. Anything he did, he was ALL IN. He was fun-loving and brought the best out of everyone. But sometimes I wondered where his sanctity came from: always making a priority of prayer, always thinking the best of others, always kind. He surpassed any example I gave him. But as I look at his journal, I’ve learned that his sanctity didn’t just ‘happen.’ He fought for it every day. Entry after entry like this:

“I am your instrument, O God; I am humble before your glory. I cower at your brightness, O God, and all I can do is praise you. O God, help me to empty myself of all that is futile. Come upon me, O God. Fill my mind; inspire my heart. May I serve you through all of my being; may everything I do radiate your love, hope, and peace. Father, make my poor self a dwelling of your glory, your Spirit. Amen.” — Isaac, age 16, 2014

This following entry, also from 2014, speaks of Isaac’s utter faith in God:

“O God, I don’t know when I will leave this world: any day, any hour. What a great goodbye that will be — all my relationships, all my work, all my longings, all my worldly joys. How soon this day will come. May I not store up any faith in a world I will leave so soon. May my only goal, my only faith, my only hope be in you, my Lord. May no hour pass without my offering thanksgiving. O Father, I am yours.”  — Isaac, age 15

Fr. Albert also spoke of another diary entry his son made at a time he was physically exhausted:

“O God, I am weary, I am weary. My limbs are heavy, my eyelids droop, my breath comes in sighs. Even so, I will sing your praise, my God. Even in exhaustion I find joy and peace in you, my God.” — Isaac, age 15

While Isaac’s unusually powerful journal entries speak of his faith, many — including college friends, classmates and professors — have shared how their personal encounters with him deeply affected their own faith and changed their lives.

Fr. Joseph Gill, a deacon at the Catholic Community of South Baltimore in 2010, who knew the Scharbach family and witnessed Isaac serve as an altar boy, recalled him to be “a quiet, devout boy — I remember him always recollected in prayer, even as a young teen,” adding that Isaac was “a soul who achieved great holiness in his 21 years.” Father Gill ended his Facebook post with: “The #1 greatest joy of being a priest is belonging completely to Jesus. The second greatest joy of being a priest is meeting living saints — people, young and old, whose holiness is an inspiration to me and to the world …”

Isaac was highly involved in high school campus ministry at Mount St Joseph in Baltimore. According to Clay Bonham, a religion teacher and director of campus ministry, “He had a strong devotion to the Divine Mercy Chaplet and said we should do it on Fridays. We did,” Bonham added, “and he brought other students in on that.” In fact, Isaac would rise early before school to pray the Divine Office on his own without any encouragement from others.

The “quiet leader” was also a well-rounded scholar, as his former science teacher, Jason Ader, attested to when explaining that although science wasn’t Isaac’s real area of interest, he nevertheless “jumped into chemistry and did incredibly well. He was an all-round world scholar. He could do it all – classics, math, the sciences. He was so talented, but never flashy. He was just quietly extraordinary.”

This level of enthusiasm and desire to serve God followed Isaac to Davidson College in North Carolina, where he was due to enter his senior year this fall as a double major in art and classical studies. He was an active member of the Catholic campus ministry and on his own initiative had begun to raise money to build an adoration chapel at Davidson, a Presbyterian college.

An athlete who loved cycling and the outdoors

As a young teen, Isaac began to share a love for cycling with his father and eventually also his younger brother. At college, he would cycle to and from Mass, and loved being out amidst God’s creation. His mother Abby has written of his great love of adventure and the outdoors:

“…whenever we went on family hikes, Isaac would run ahead and climb up every rock or precipice he could find. He loved the heights, the conquest. In life, he’s run ahead of us in every way—in holiness, in love, and vision. And now he’s climbed that last mountain ahead of us too.”

An artist and lover of beauty

As if all these graces and talents weren’t enough, Isaac was a very gifted artist who recognized beauty all around him and deeply related to this great attribute of God. His father shared a few of his diary entries that Isaac specifically wrote about beauty:

“What does it mean to love someone? To appreciate the beauty of a person. That is, to see Christ in them and adore him.” – Prayer journal, inside cover

“O God, what incomparable joy it is to love and serve you. Beauty in art, in poetry, and in nature points to your beauty, O God, and I thank you that you have so blessed us in this world with knowledge of you—perception of and attainment of you being the end of all beauties.” – Prayer journal, 2/19

“Jesus was present throughout salvation history in God’s revelation to his people. This reached it’s climax when this Word became flesh. By creating something beautiful, the artist has the responsibility of revealing God, of making Christ mystically incarnate in his work.” – Art journal, 12/19

Isaac began creating art, including sacred art, in high school, and studied under one of the best iconographers in the world in Greece during his junior year in college. In fact, he was due to spend this past summer at Mount Athos doing just that, but the pandemic prevented it.

Through his faith and the example set to him by his incredible family, Isaac grew into a man who served God in everything he did. In addition to his humility, perhaps what stood out most about him for most people was his kindness and readiness to serve.

“Isaac was always kind, he always thought the best of others and he was always trying to help people,” shared his father. “And I mean always, without exception. There are very few other people I can say that about, if anyone.”

This young man truly made a difference to those he met. It is a true testament to his virtue for his father to share in an interview with The Catholic Review, “I raised my son, but now he is raising me up by his example.”

Isaac leaves behind his mother and father and his eight siblings: Keelan, Kady, Ander, Ellie, Thomas, Sophie, Alessia, and Greta. May his soul, and the souls of all our faithful departed, rest in peace. Isaac Scharbach, pray for us!