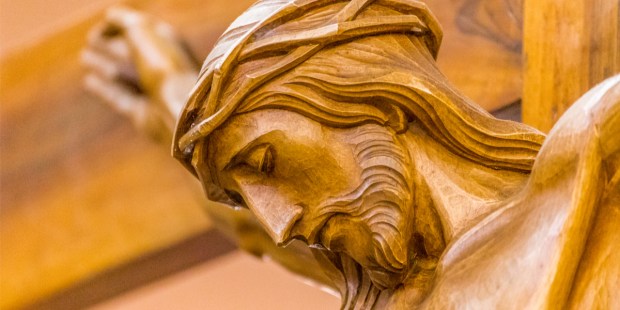 A little catechism lesson has some real-life implications in how we relate to God.

The Incarnation, God becoming man, is one of the deepest mysteries of our faith. The Second Person of the Trinity took on a human nature and lived on earth as one of us. How can God be a man? How can a man be God? Thinking through the implications of this central truth can be dizzying, and has often led to heated controversy. But these disagreements have in turn produced illuminating and profound conclusions.

To take one example, in the early 5th century the title “Mother of God” had begun to spread among the faithful as an honorific for Mary. The reasoning was simple: Jesus is God; Mary is Jesus’ mother; thus, Mary is the mother of God. The patriarch of Constantinople, Nestorius, objected to this, with his own compelling arguments: how could God have a mother? How could the Eternal One be said to be born?

Nestorius’ solution was to essentially split Christ in two, and say that somehow “his humanity” was born of Mary but not his divinity. A council was called at Ephesus in 431, at which the Church defined that the one who was born of Mary was the eternal Son of God, and thus she is rightly called Theotokos, “God-bearer.”

Because of this union of two natures in the one person (called the hypostatic union, or union of two physis in one hypostasis), we are able to speak of Jesus acting divinely, or of God the Son acting humanly.

This is called the communicatio idiomatum, or “communication of idioms.”

So, for example, we can rightly say that “Jesus raised the dead and forgave sins,” something only God could properly do, or even “Jesus created the universe.” Likewise, we can say “God thirsted” or “God wept,” since the one who did these things, Jesus, was truly God.

Yet this form of expression gave rise to a great controversy with the following phrase: “God suffered on the cross.” Along with being eternal and infinite, God had always also been said to be impassible, meaning “incapable of suffering.” God is never acted upon, for He Himself is pure act, incapable of change. Yet if Jesus is truly God, and Jesus suffered on the cross, we must say God suffered. But how could that be?

Once again, the distinction between person and nature helps us to understand. If we ask, “Who is the one who suffered on the cross?” the answer is “the Son of God, the Second Person of the Trinity.” If we ask, “What was that which suffered,” the answer is, “He was both human and divine.” In his humanity, Christ was able to suffer.

This should build up in us a profound sense of gratitude. To know that God entered into our suffering Himself to redeem it, and us along with it, is to know the deep intensity of God’s love for us.

As St. Augustine put it, God did not suffer and die for humanity, but for each man. If you had been the only person ever to live, and had fallen into sin, God would have taken on humanity to suffer and die and save you.

Imagine if Nestorius had been right, if there were some deep divide between Christ’s humanity and divinity. God would not have entered into our suffering. The crucifixion would be little more than a play, a divine puppet master pulling strings on a human costume or stand-in.

We sometimes think of Christological controversies as technical disputes on esoteric matters settled long ago. Yet here we can see they have real implications—for us, and for our relationship to God.