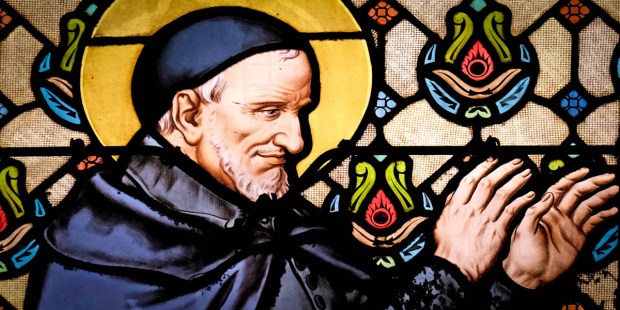 St. Vincent de Paul instructed his own health care workers on how to treat each patient with dignity and respect.

St. Vincent de Paul is well-known for his charitable activities, and among them was his ability to guide health care workers in caring for the sick and dying.

He wanted them to serve the sick as if they were serving Jesus Christ, seeing him in every patient.

According to an early 20th-century book The Charities of St. Vincent de Paul, the saint wrote specific guidelines for how to approach patients with tenderness and compassion.

St. Vincent instructs his nurses to treat their patients “with compassion, kindness, cordiality, respect, and devotion, even the most troublesome as also those toward whom they will feel some repugnance … considering that it is not so much to them as to Jesus Christ that they render service.”

Furthermore, he advised them to listen attentively to the “little complaints” that patients often give.

You ought to listen “to their little complaints,” he continues, “as a good mother would do, for they look upon you as their foster mothers, as persons sent to assist them.” “Encourage them to suffer their ills patiently for the love of God,” he tells them again; “bear with their little whims, never become vexed with them nor speak rough words to them. Ah, they have enough to do to suffer their illness! Think, on the contrary, that you are their visible guardian angel, their father and their mother; do not contradict them except in what is harmful to them … God has instituted you to be their consolation.”

St. Vincent de Paul not only encouraged them to be sensitive to the needs of every patient, but also to dress in a way that made them more approachable.

They were instructed “to conduct themselves with great humility, meekness and affability toward the poor sick, speaking to them in a familiar and cordial manner in order to gain them the more easily for God.” This condescension was not restricted to manner and words. He gave them the further instructions “to dress as simply as possible on the days on which they went to the Hôtel-Dieu [the hospital] in order to appear poor with the poor, or at least far removed from vanity and luxury of dress, in order not to cause pain to these poor sick, who, seeing the excess and the superfluities of the rich, ordinarily grieve the more on that account that they have for themselves not even the things that are necessary for them.”

Above all, St. Vincent de Paul wanted health care workers to realize the importance of their vocation and how they have a special role not only in tending to the physical needs of the patient, but also in being a faithful witness of the Gospel.

When these guidelines are followed, the hospital and clinic no longer become a place of fear, but a place where Christian charity is seen and lived out.