Forget Romeo and Juliet -- this balcony story has a happy ending!

Everyone is rightly frustrated with COVID-19, but to give you a little boost, here’s a charming story of a couple who met during the lockdown in Italy and who are now planning their wedding.

In fair Verona (to quote Shakespeare), Paola Agnelli, 40, a lawyer, spotted Michele D’Alpaos, 38, from her balcony during the 6 p.m. “concerts” performed on balconies that set a similar trend throughout the world. While the musical performances were set to lift community spirits, they also provided neighbors an opportunity to get to know each other a little more.

For Agnelli and D’Alpaos, these nightly performances prompted the beginning of a safe-distance relationship. The couple initially spotted each other on one particular night when Paola was offering sound assistance to her sister, Lisa, during her violin performance of “We Are the Champions,” by Queen.

D’Alpaos used a few detective skills, via Agnelli’s Instagram account, to find out more about his neighbor. He sent her a message that sparked texting into the early hours. As the couple got to know each other, they chatted on the phone and feelings developed further — so much so that D’Alpaos made a big banner to hang from his building with Paola’s name printed on it, to show his neighbor how much she meant to him.

They finally had their first date in a park in May, and just a few months later the pair, who’ve never been married, are planning their wedding. Turns out the couple had lived next to each other for much of their lives, and while they met each other by chance a year ago, it took a global pandemic to finally bring them together.

Perhaps the fact that the couple could lean on each other during the lockdown, even from afar, meant that they had built a solid foundation before they met up properly. Now they just need to choose a date, and as D’Alpaos shared with the Daily Mail: “We are considering a ceremony on the large roof terrace of my building, which would make sense since we met on our balconies.”

Finally a balcony love story that ends happily — one Shakespeare himself could never have envisioned!

While people have found love in more unusual ways during COVID-19, the clergy has also been adapting to new restrictions. Here’s some of the creative ways the religious have been ministering to their parishioners: 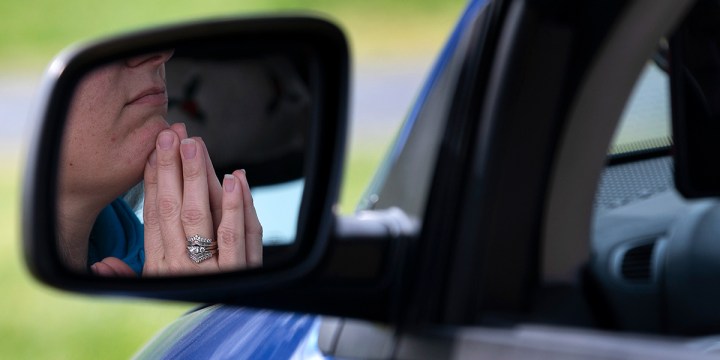