What is the difference between an angel and an archangel? 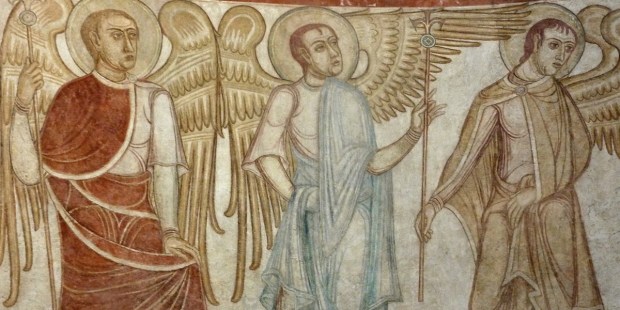 The word “angel” is a more broad term, while “archangel” refers to a specific rank of angels who are entrusted with special tasks.

Angels are fascinating spiritual creatures that captivate the imagination of both Christians and non-Christians alike. However, many are confused by the terminology used to refer to angels, especially with the two most common terms of “angels” and “archangels.”

What is the difference?

First of all, the English word “angel” comes from the Latin angelus, meaning “messenger of God.” The Latin stems from Greek ἄγγελος ángelos, which is a translation of the Hebrew mal’ākh, meaning “messenger,” or “delegate,” or “ambassador.” The Catechism of the Catholic Church puts it this way:

The word “angel” then simply describes what they do and not what they are. Angels are above all messengers, and as we will see when we open up Sacred Scripture, they are messengers of God’s divine plan.

At the same time, it is common to use the term “angel” to describe those angels that interact with humans, such as our guardians angels. These angels are considered the lowest rank of angels in the traditional hierarchy of angels.

Read more:
The 9 choirs of angels and the roles given them by God

When it comes to the term, “archangel,” the word includes the prefix “arch-,” used to denote something as “chief” or “principal.” An “arch-angel” then is a “chief messenger” of God.

These angels are higher in rank than guardian angels, but are still part of the second lowest rank. It is believed that these two lowest ranks of angels are the only ranks who interact with humans.

Archangels are also given the most important messages that must be delivered to humans. Such was the task of St. Gabriel, when he delivered the news to Mary that she was to bear the Messiah.

Nevertheless, both angels and archangels remain mysterious beings to humans, who still know relatively little about them. God has revealed only a small amount of information in the Bible about them, and the rest is interpreted through the guidance of the Church.

Read more:
Do we become angels when we die?