Pope: Spreading devotion to Archangel Michael a “work of mercy for body and soul” 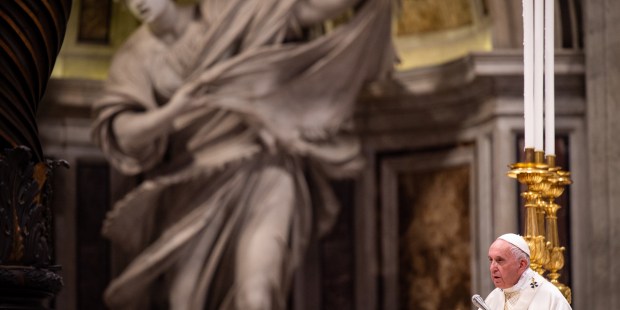 Francis urges religious under angel’s protection to remember Michael’s name and victory cry that defends us from egotism: “Who is like God?”

Pope Francis urged a group of religious dedicated to St Michael the Archangel to continue promoting devotion to this “powerful victor over the powers of evil.”

In a talk to the Congregation of St. Michael Archangel that the Holy See published Friday, the Holy Father noted the congregation’s 100 years of existence. They were founded by Polish priest Blessed Bronislao Markiewicz.

Markiewicz first began his journey as a Salesian who learned directly from that order’s founder, St. John Bosco. He eventually left Rome to return to Poland, continuing the work of John Bosco with poor and orphaned children, and going on to found his order under the patronage of St. Michael.

Read more:
Overwhelmed by so much evil? Here are 3 of St. Michael’s weapons

He died in 1912, and the then archbishop of Krakow – Cardinal Adam Stefan Sapieha – approved the order on the feast of the Archangels, September 29, 1921.

“Don’t stop referring to the words that have enlightened your distinguished congregation for these 100 years: the victorious cry of St. Michael the Archangel: “Who is like God!” — which defends man from egotism; and the principle of “temperance and toil” — which indicates the paths to follow in carrying out your charism,” Francis told the religious.

I hope that your religious family continues to spread the apostolate of St. Michael the Archangel, that powerful victor over the powers of evil, seeing in it a great work of mercy for the body and the soul.

The pope praised their work for the abandoned and discarded, and also mentioned how the charism of the institute calls them today to work with children who are conditioned by the modern world and slaves of addiction.

According to the Pontifical Yearbook of 2010, the congregation then had 27 houses for 345 religious, including 253 priests. The Generalate is in Poland, but the Attorney General resides in Rome near the Domine Quo Vadis Church.

It was not until September 29, 1921 that the Archbishop of Krakow recognized the congregation nine years after the death of its founder Bronisław Markiewicz. The institute received the decree of praise on June 15, 1966, under the pontificate of Paul VI.

Read more:
During a deadly plague, Pope Gregory had this consoling vision of St. Michael the Archangel