“The Three-Personal God” explained by a C.S. Lewis doodle 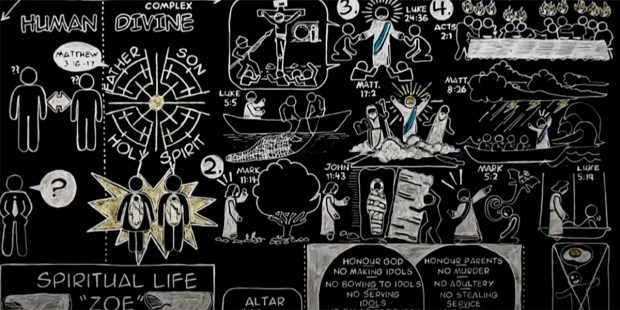 Having trouble understanding the Trinity? Watch this video illustration based on the Christian apologist’s BBC radio talk

C.S. Lewis, the author of the popular Chronicles of Narnia series of children’s books, was perhaps the greatest Christian apologist of the 20th century. His book Mere Christianity, which was based on a series of BBC radio talks, has sold more than 3.5 million copies since 2001, and has been translated into at least 26 languages.

The creative minds at the C.S. Lewis Doodle YouTube channel have reproduced Lewis’ radio talks to the accompaniment of animated chalkboard illustrations. Whether you watch the videos while reading Mere Christianity or simply view them on their own, the C.S. Lewis Doodles help explain sometimes difficult theological points in an entertaining way — much as Lewis himself did in his radio broadcasts.

The most recent doodle is based on C.S. Lewis’ second talk from his fourth radio series, called “Beyond Personality: Or First Steps in the Doctrine of the Trinity,” recorded on February 29, 1944.

Watch the video below: