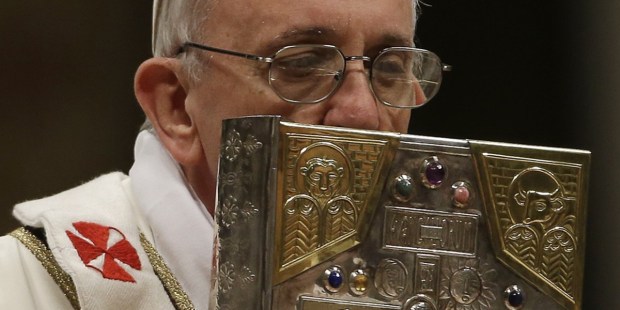 St Jerome bequeathed to the Church “devotion to the Sacred Scripture, a ‘living and tender love’ for the written word of God,” says Pope Francis in a new Apostolic Letter on the 1,600th anniversary of the death of the great Doctor and Father of the Church.

“Jerome’s profound knowledge of the Scriptures, his zeal for making their teaching known, his skill as an interpreter of texts, his ardent and at times impetuous defence of Christian truth, his asceticism and harsh eremitical discipline, his expertise as a generous and sensitive spiritual guide,” the Pope writes in Scripturae Sacrae affectus (“Devotion to Sacred Scripture”), “all these make him, sixteen centuries after his death, a figure of enduring relevance for us, the Christians of the twenty-first century.”

A life devoted to Christ and His word

Reviewing the life of the fourth century saint, Pope Francis notes that Jerome devoted himself entirely “to Christ and His word,” working unceasingly “to make the divine writings accessible to others. The Pope highlighted two dimensions of the saint’s life especially: his “absolute and austere consecration to God,” and “a commitment to diligent study, aimed purely at an ever deeper understanding of the Christian mystery.”

Pope Francis dwells on Jerome’s love of Scripture, which focused on the “humble character of God’s revelation,” more than on “the narrative and poetic genius of the Bible.” Jerome approached the Scriptures in an even “more systematic and distinctive way” than the other early Christian Fathers, emphasizing the necessity of knowing the Bible in order to know Christ.

Jerome’s study of the Scripture, the Pope says, was steeped in obedience, both to God Himself and “to those in the Church who represent the living Tradition that interprets the revealed message.” But, Pope Francis insists, “The ‘obedience of faith’ is not, however, a mere passive reception of something already known; on the contrary it demands an active personal effort to understand what was spoken.”

Pope Francis notes that many people find the Bible difficult to read—not because of illiteracy, but because they have not learned the skills necessary to make the sacred text intelligible.

“This shows the need for an interpreter,” writes Pope Francis, adding, “Jerome can serve as our guide… because he leads every reader to the mystery of Jesus.”

The Pope notes that Jerome’s translation of the Scriptures into Latin helped to shape western culture. “Jerome’s work of translation teaches us that the values and positive forms of every culture represent an enrichment for the whole Church,” while at the same time witnessing “to the fact that the Bible continually needs to be translated into the linguistic and mental categories of each culture and generation.”

Pope Francis also explains the importance of translation as a form of “hospitality”: a translator, he writes, “is a bridge builder,” helping people of different languages and cultures not only communicate with, but also understand one another.

“Today more than ever,” writes Pope Francis, “our world needs the medicine of mercy and peace.”

Devotion to Rome and the Popes

Saint Jerome was also known for his deep devotion to Rome and to the Popes. “At a turbulent time in which the seamless garment of the Church was often torn by divisions among Christians, Jerome looked to the Chair of Peter as a sure reference point.”

Jerome himself “was often involved in bitter disputes for the cause of the faith,” which he often carried out with great passion. Nonetheless, although willing to fight vehemently for the faith, Jerome loved and desired peace. “Today more than ever,” writes Pope Francis, “our world needs the medicine of mercy and peace.”

Example of love for the Scriptures

Concluding his Letter, Pope Francis appeals to everyone to take Saint Jerome as an example of love for Sacred Scripture and devotion to study. “I would like to pose a challenge to young people in particular,” he writes: “Begin exploring your heritage. Christianity makes you heirs of an unsurpassed cultural patrimony of which you must take ownership. Be passionate about this history which is yours. Dare to fix your gaze on the young Jerome, who, like the merchant in Jesus’ parable, sold all he had in order to buy the ‘pearl of great price’.”

Pope Francis expresses his hope that we might “love what Jerome loved,” rediscover his writings, and allow ourselves “to be touched by his robust spirituality.” He points to the Blessed Virgin Mary as “the model of prayerful reading of the Scriptures,” encouraging us to “entrust ourselves to Our Lady who, more than anyone, can teach us how to read, meditate, contemplate, and pray to God, who tirelessly makes Himself present in our lives.”

Read more:
What we probably don’t know about St. Jerome is just what we need to know