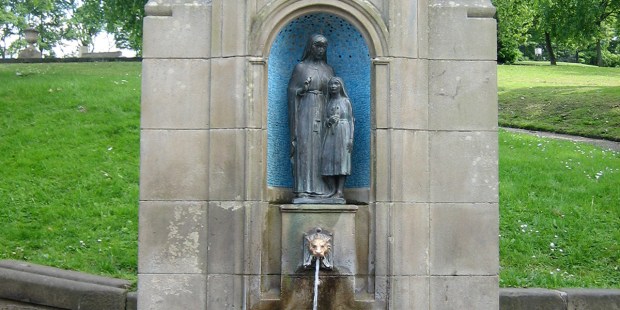 Buxton Mineral Water has as its source the same geothermal spring that was the source of a well dedicated to the mother of the Virgin Mary.

Walk into a grocery store in Britain, and you can purchase a plastic bottle of Buxton Mineral water. What you might not know is that the water comes from the same spring that fed St. Ann’s Well, a shrine to the mother of the Virgin Mary and a Catholic pilgrimage site.

Since the Roman times, healing properties have been attributed to water from St. Ann’s Well, a geothermal spring in Buxton, Derbyshire in England. When the Romans arrived in Buxton, they built a bath around the spring, which they named Aquae Arnemetiae (The Waters of the Goddess of the Grove).

The well, which taps 5,000-year-old rainwater that traveled across mineral-rich rock, was first mentioned as a holy well by William Worcester around 1460:

“Memorandum that Holywell … makes many miracles, making the infirm healthy, and in winter it is warm, even as honeyed milk.”

According to the website Holy and Healing Wells, it is not clear when the well became dedicated to St. Anne, the mother of the Virgin Mary. But by the mid-16th century, it became known for its healing powers, attracting pilgrims in search of cures for their ailments.

That all came to and end in 1538 when Thomas Cromwell closed the well during King Henry VIII’s dissolution of the monasteries, ordering it to be “locked up and sealed.”

Nevertheless, the Catholic Mary Queen of Scots was a frequent visitor to the well while she was staying at nearby Chatsworth House by order of her cousin Queen Elizabeth I. Suffering from rheumatism, she was allowed by the Queen to take the cure until her departure in 1584. Upon leaving she etched in Latin on the window of her room:

“Buxton, whose fame thy milk-waters tell, Whom I, perhaps, no more shall see, farewell.”

Mary prophesied correctly, for by 1585 she was implicated in a plot to assassinate the Queen, imprisoned, and finally executed in 1587.

In the 18th century, the well became public property, and gave rise to Buxton’s development as a spa town. Throughout the Victorian era, Buxton attracted visitors and who came to “take the cure.”

Since the 19th century, the Buxton Mineral Water Company has bottled water sourced from St. Ann’s Well. In 1992, Nestlé acquired the company, and opened up a new bottling plant in 2012 just two miles from the original well where Mary Queen of Scots took her last sip of healing water.