Is the Neo-Gothic style back in fashion? 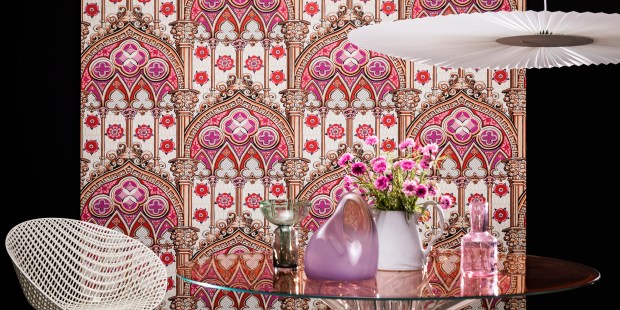 Rooted in the timeless beauty of Gothic cathedrals, this centuries-old style is having a cultural resurgence.

Are so-called “cathedral” motifs coming back into vogue in the world of decoration? Having largely fallen into oblivion, the Neo-Gothic style seems to be making a comeback, more than 100 years after its glory days during the 19th century.

Starting in the 1820s, the Neo-Gothic style, also known as Gothic Revival, began in England and soon spread from churches and other public buildings to private interiors, taking over furniture, lighting and drapery. The style was largely based on an interpretation of the “ogive,” or pointed arch, a key element of the period’s taste for Gothic motifs. Ogives, finials, and pinnacles, borrowed from the flamboyant Gothic of the 15th century, embellished facades, offices, fireplaces and more. You could say that in the 19th century, the Middle Ages were trendy.

France is a showcase for both Gothic architecture and its 19th-century rebirth. The country discovered a passion for the Middle Ages after the Revolution and the Empire. The nostalgia of those centuries inspired the Romantic painters, while Victor Hugo’s famous novel, The Hunchback of Notre Dame (1831), in which the cathedral is both the setting and the main character, provoked a popular enthusiasm for the cathedral era. Viollet-le-Duc authored daring medieval restorations and reconstructions that testify to this craze for a completely idealized Middle Ages.

Eventually, the enthusiasm for reusing Gothic elements in contemporary constructions died out. Since last spring, however, it has flourished again in France in the world of interior decoration. It’s no coincidence that this resurgence came soon after the tragedy of the fire at Notre Dame Cathedral in Paris, the ultimate example of Neo-Gothic inspiration. Here are a few examples:

The Maison Pierre Frey has reinvented the medieval style in its own way. “Alleluia,” a wallpaper from the new collection, reproduces a pattern printed on a wooden plank around 1830. It represents a stylized and re-dimensioned Gothic architecture:

Through this creation, the studio has utilized the Neo-Gothic elements anew, while lightening the design. Like a window on the past, the design updates an old pattern thanks to a play of colors (four truly luminous tones, including an intense blue and a resolutely contemporary pink).

The famous L’Atelier d’Offard, in Tours, has reprinted a soaring “Cathedral” frieze:

The 2020 collection from the famous Zuber factory in Rixheim, near Mulhouse, gives pride of place to archival documents of the glory of the Gothic period, which can be printed on wallpaper and upholstery fabrics. They can also be made in the customer’s colors, for a very personal Gothic revival. We love the sublime “Cathedral”!

If you happen to be in France, or are able to visit, these and other examples are included in an exhibition that runs until March 2021 at the Wallpaper Museum in Rixheim, forging links between architecture and wallpaper. The pinnacle of the catalog is a wallpaper from the Manufacture Isidore Leroy, Paris, 1899, inspired by Gothic art.

At the Puces de Saint-Ouen and in the showcases of prestigious antique dealers, beautiful furniture, clocks and lights inspired by Gothic churches have been reappearing for 15 years now, notably “cathedral-style” chairs with backrests with tri-lobed arches.

But is this the beginning of a wider trend? These could be signs of a wider rebirth of interest in this elegant and uplifting style. After all, the original Gothic style was born in France, and spread from there to the rest of Europe; even today, many trends start in Paris. Although the examples we’ve cited are in a secular context, one could hope that a wider presence of Neo-Gothic motifs could have a subtle, positive spiritual effect.

Of course, this style has special meaning for Catholics. Discussing the origin and meaning of the Gothic style, Pope Benedict XVI said:

Gothic cathedrals show a synthesis of faith and art harmoniously expressed in the fascinating universal language of beauty which still elicits wonder today … The Gothic cathedral intended to express in its architectural lines the soul’s longing for God … The splendor of the Gothic cathedrals remind us that the via pulchritudinis, the way of beauty, is a privileged and fascinating path on which to approach the Mystery of God.

While such things are only implicit in wallpaper, patterned cloth, or furniture, they could be an appeal to people’s soul that leads to greater things through the way of beauty.

Read more:
Bringing back beauty: The new traditional Catholic churches of the U.S.