Schools around the world struggling to get kids back in class 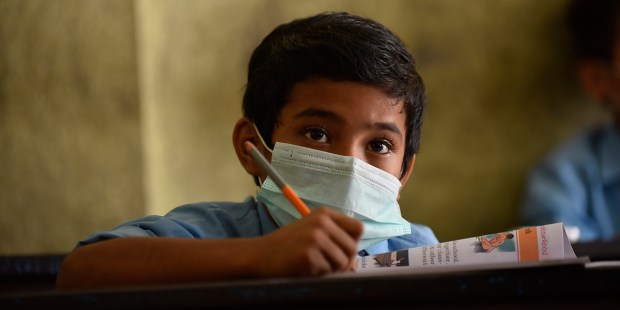 COVID-19’s interruption of education is having devastating effects in some parts of the world.

As American school districts continue to balance the need to keep students actively learning with concerns about the spread of COVID-19, many children around the world don’t even have the option to go back to class.

UNICEF Executive Director Henrietta Fore said recently that half the world’s student population are still unable to head back to their classrooms.

“Today, almost nine months since the coronavirus outbreak started, 872 million students — or half the world’s student population — in 51 countries are still unable to head back to their classrooms,” Fore said September 15 at a joint UNESCO, UNICEF and WHO press conference in New York.

Even in the United States, in districts where education is still taking place online, many students are not showing up for their Zoom sessions, according to some reports.

But in some parts of the world, there is no such thing as “online learning,” whether it’s through the internet, TV or radio.

“In the rural areas, many people don’t have access to electricity, let alone the internet,” said Delhi-based Fr. Joson Tharakan, India country coordinator for the charity Mary’s Meals. “Even if there is accessibility, many people don’t have platforms. We have 102 schools where we are operating normally, pre-pandemic, but none has been able to open, and none has online classes. Children don’t have the gadgets; there is no internet, and many teachers are not trained. Even many teachers don’t have the gadgets.”

India has ordered elementary and middle schools to remain closed indefinitely, affecting more than 200 million children, according to the New York Times. Some teachers are making house calls and teaching in small groups, and youngsters preparing for universities are allowed to go to school, but the vast majority of students are either idle or scrounging for ways to help their families make money.

“The worst affected and afflicted people are the children in the rural areas, the poor children,” Fr. Tharakan said in an interview last week. “In the villages, children are idle, helping out with the farming if their family has land. … Our urban slum schools are in a total standstill situation where there is no learning at all happening, because most of the children were displaced, and for those who remain it’s a time of survival, because they’re trying to get food; parents are trying to get some work, and nothing else.”

He said that Indian children “don’t know how to spend their time,” so there is a lot of anxiety and restlessness. There are no books to read or television to watch.

Crucially, children are losing the habit of learning.

“There used to be a culture of going to the school,” he said. “Life seems to be without aim — just get up in the morning and roam around wherever they can.”

Mary’s Meals, which was founded by a Scottish salmon farmer and now works in 19 countries, provides meals in a school setting so that children in some of the world’s poorest areas can continue their education. During the pandemic, Fr. Tharakan said, the charity continues to provide the raw materials, which parents can pick up at school and cook at home.