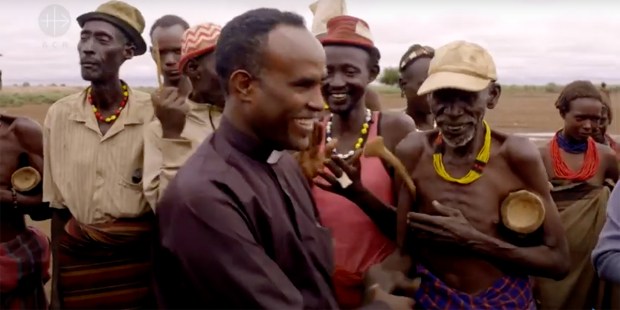 “Abba Goesh seemed to be profoundly convinced that God had sent him to this place and to the people inhabiting this land,” says director Magdalena Wolnik.

A documentary film co-produced by Aid to the Church in Need (ACN) about a missionary, Abba (Father) Goesh, living with the Dassanech people on Ethiopia’s Omo River, was nominated in the best documentary category for the 23rd Religion Today Film Festival in Trento (Italy). The festival took place from Sept. 23-30.

The film was directed by Magdalena Wolnik, maker of several dozen documentary films made in cooperation with Catholic Radio and Television Network (CRTN) and ACN. Ms. Wolnik talks about the making of “Ethiopia – From every clan.”

Watch a 10-minute segment from the film here:

How did you “find” the story for the film?

The first visit to Omorate led to the most terrible hours spent in Ethiopia. We went there with Bishop Tsegaye Keneni Derara from Soddo and Father Andrzej Halemba, who was then responsible for ACN projects throughout the country.

Getting to the Omo River valley, along the Kenya and South Sudan border, is not easy. A truly decent road was only built two years ago. We arrived at our destination in the evening, after many hours, and were put up in a small guesthouse, built by zealous young priests who had forgotten about ventilation, window netting or mosquito nets.

Of course, we did not expect electricity. Outside, apart from the mosquitoes, you would trample on scorpions on your way to bed, meet a few poisonous snakes, as well as hyenas taking advantage of the lack of any fence. More than 100 degrees, even at night, no air, means no sleep. Hell on earth.

Abba Goesh seemed to be profoundly convinced that God had sent him to this place and to the people inhabiting this land. It seemed impossible to live here without such a belief. After those first hours and conversations with him, I knew for certain that we would be back with a camera.

How was the filming? Was it difficult to get the people involved?

Once we began filming, things only got worse. If it weren’t the heat, it would be a powerful downpour and sticky mud, with a multitude of scorpions emerging; or a plague of insects, preventing you from opening your mouth; then a sandstorm, that instantly blanketed the entire landscape in brown dust. Our brand-new sound recorder failed on the second day.

The villagers were initially not very friendly. There, strangers are not allowed to enter your enclosure, much less your hut. We gained their trust in the end, but more on the back of that earned by Father Goesh. He was our gateway into this fascinating world of the Dassanech tribe.

We felt privileged and grateful to be allowed access with our camera, behind these people’s veil of inaccessibility, of an individuality and uniqueness they had a right to protect. In recent years more and more tourists have been coming to the Omo Valley, rich in “exotic tribes.” This meeting of two worlds is sometimes violent and destructive. So, we tried to be wholly respectful, humble and gentle.

What is the heart of the story?

This film aims to show a unique ethnic group, which, while still living a very traditional lifestyle, and fighting bloody battles with local tribes, finds itself, very suddenly, on a collision course with change, including climate change with the inevitable drought and hunger that follows.

They need a guide, capable of helping this group to confront and deal with this reality. Not only in material terms—including education, agriculture and the knowledge needed to survive in a changing world—but also in spiritual terms. How to stop waging destructive wars? Whom to entrust one’s life to?

Father Goesh took on that role.

One of the village chiefs spontaneously introduced Father Goesh, explaining who he is for them: “He told us how we can live with other neighboring people. He taught us what peace means.”  Another added, “Father Goesh is our brother. He is a man of God. He taught us how to worship God.”

The Dassanech people are a beautiful, unspoiled, and fascinating tribe. However, this is not an anthropological film. It is also Father Goesh Abraha’s story: an Ethiopian, from the mountainous north, who decides to live among these people—to live with them, share their concerns and convey to them a deeply held belief, that God is more than my and your culture and tradition, more indeed than any great culture; that He can give freedom and peace to each one of us. That He is from every culture, from every clan.

Father Goesh builds a chapel in the wilderness, believing that with time, the feuding clans and tribes will end up praying together; that it will become their church, with which they will identify themselves—a sign of peace, reconciliation and hope.

He is also a happy man who says that you can learn to love a culture that is not yours, embrace and accept the unknown: smells, tastes, even the challenges of living in this seemingly unlivable place. And it changes you.

This article was first published by Aid to the Church in Need and is republished here with kind permission. To learn more about ACN’s mission, visit www.churchinneed.org