The basic values needed for solidarity 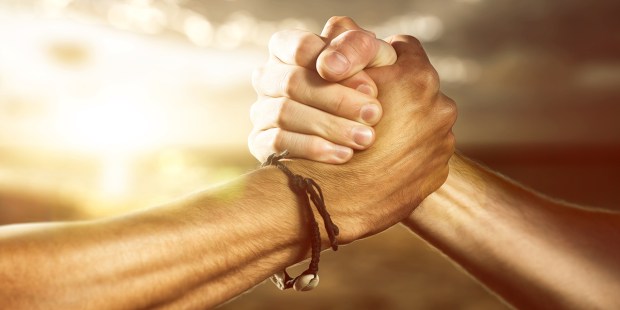 St. John Paul II laid out what he believed was necessary for solidarity and fraternal charity to be successful.

St. John Paul II was a true bridge-builder during his time as pope. He did all that he could to spread the Good News of the Gospel to every continent, and to people of every religion.

However, he also believed there were basic values that needed to exist for authentic human fraternity and solidarity to be established. He explained his thoughts in his message for the 22nd World Communications Day.

In order that the very existence of brotherhood and human solidarity may be made possible, and still more so that their Christian dimension may be more intensely developed, the elementary values which underlie them have to be given recognition. Permit me here to recall certain of these: respect for others, a willingness to dialogue, justice, healthy ethics in personal and community living, freedom, equality, peace in unity, promotion of the dignity of the human person, the capacity to share and to [discern] with others. Brotherhood and solidarity rise above all clannish and corporation spirit, all nationalism, all racism, every abuse of power, every individual fanaticism, be it cultural or religious.

John Paul II believed that these values must also be accompanied by an acknowledgment of the spiritual life, without which solidarity would not be possible.

In the midst of the ever more concentrated and active network of social communications spanning the world, the Church binds itself simply to keep on ceaselessly recalling, as “an expert in humanity,” the values which constitute the grandeur of the human being. But she is at the same time convinced that these cannot be assimilated and put into action in the concrete, if the spiritual life of the human being is forgotten. For Christians, the revelation of God in Christ is an illumination on man and woman, on humanity itself. Faith in the message of salvation constitutes the most deeply felt motivation for serving the human race. The gifts of the Spirit engage us in the service of others in a brotherly solidarity.

If we can keep these basic values in mind and allow ourselves to be motivated by the charity taught by Jesus Christ, then we can be better prepared to live as brothers and sisters.

Read more:
Solidarity: Why we need it and how to get it