10 Things to know about the pope’s newest encyclical letter 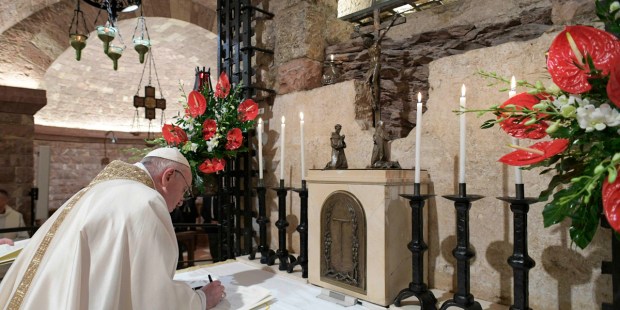 This third encyclical from Pope Francis is inspired by St. Francis.

Today, October 4, the feast of St. Francis of Assisi, the Holy Father has released a new encyclical letter, addressed to all men and women of good will. Here are 10 things you need to know about that letter.

1 – The name of the letter, Fratelli Tutti, means “All brothers,” and is a direct quotation from the Admonitions of St. Francis. The admonition reads, “Let us all, brothers, consider the Good Shepherd who to save His sheep bore the suffering of the Cross” (Admonitions, 6.1).

2 – The letter is about fraternity and social friendship. Pope Francis writes, “It is my desire that, in this our time, by acknowledging the dignity of each human person, we can contribute to the rebirth of a universal aspiration to fraternity. Fraternity between all men and women” (Fratelli Tutti, 9).

3 – St. Francis, the inspiration for the Pope’s encyclical letter on the environment, Laudato Si’, also inspired Fratelli Tutti. The Holy Father attests, “Francis was able to welcome true peace into his heart and free himself of the desire to wield power over others. He became one of the poor and sought to live in harmony with all. Francis has inspired these pages” (Fratelli Tutti, 4).

4 – The Holy Father states that the possibility for human fraternity is grounded in the inalienable dignity of every human being. He writes, “Social friendship and universal fraternity necessarily call for an acknowledgement of the worth of every human person, always and everywhere” (Fratelli Tutti, 108). If the dignity of persons with disabilities, those experiencing poverty or those who lack access to education is threatened, “fraternity will remain just another vague ideal” (Fratelli Tutti, 109).

5 – The Holy Father, without intending an exhaustive analysis, proposes a list of “dark clouds” that inhibit the cultivation of human fraternity. Among these are: the rise of “throw-away” culture, threats to the dignity of migrants, the COVID-19 pandemic, aggression fueled by digital communication, and a loss of the love of wisdom. (Fratelli Tutti, 9-55).

6 – The theological heart of the letter is a meditation on the parable of the Good Samaritan. Pope Francis teaches, “The parable eloquently presents the basic decision we need to make in order to rebuild our wounded world. In the face of so much pain and suffering, our only course is to imitate the Good Samaritan” (Fratelli Tutti, 66). The Holy Father urges us to not be among the robbers nor to be among those who abandon the weak, but to “be Good Samaritans who bear the pain of other people’s troubles rather than fomenting greater hatred and resentment” (Fratelli Tutti, 77).

Read more:
The theological heart of “Fratelli Tutti,” and where to find hope

7 – Human fraternity will be nourished by a re-discovery of love. Love, which unites by drawing a person out of his/her own self, allows us to experience the depths and fullness of life. Pope Francis writes, “Love, then, is more than just a series of benevolent actions. Those actions have their source in a union increasingly directed towards others, considering them of value, worthy, pleasing and beautiful apart from their physical or moral appearances” (Fratelli Tutti, 94).

8 – The Holy Father appeals for a new kind of politics, one aimed truly at seeking the common good of all. He writes, “Lack of concern for the vulnerable can hide behind a populism that exploits them demagogically for its own purposes, or a liberalism that serves the economic interests of the powerful” (Fratelli Tutti, 155). This new politics must have at its center charity, animated by the willingness to make sacrifices and the openness required to be truly unitive.

9 – Pope Francis calls for a total eradication of the death penalty. He writes, “Today we state clearly that ‘the death penalty is inadmissible’ and the Church is firmly committed to calling for its abolition worldwide” (Fratelli Tutti, 263). Arguing that not even murderers surrender their fundamental dignity, Pope Francis sees the death penalty as an offense against the inalienable dignity of the person.

10 – The Holy Father argues that religious witness to God contributes to the common good of society. Pope Francis writes, “The effort to seek God with a sincere heart, provided it is never sullied by ideological or self-serving aims, helps us recognize one another as travelling companions, truly brothers and sisters” (Fratelli Tutti, 274).

The encyclical letter closes by commending, along with St. Francis, the example of Blessed Charles Foucald. Pope Francis notes, “Only by identifying with the least did he come at last to be the brother of all.” Such should be the goal of every Christian.

Read more:
Start with these 15 phrases to get a taste of pope’s new letter