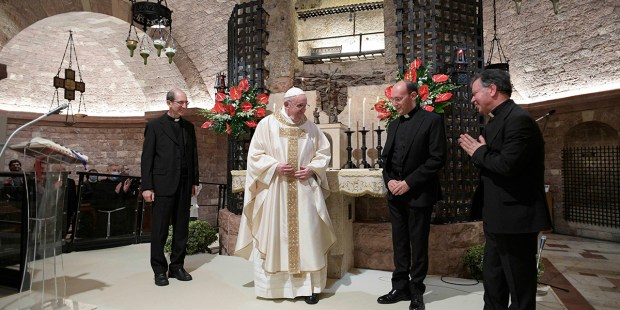 “Fratelli Tutti” considers how we might create a world where the dignity of every person is recognized.

Fratelli Tutti, Pope Francis’ third encyclical, is a social encyclical, considering the attitudes and actions that must be implemented so that all the peoples of the world can live in dignity and peace.

At its heart is a beautiful reflection on the parable of the Good Samaritan.

Pope Francis signed the document on October 3 in Assisi, and it was released by the Vatican on October 4, the feast of St. Francis.

These 15 phrases excerpted from throughout the document will give you an initial taste.

What is true as long as it is convenient for someone in power stops being true once it becomes inconvenient. (#25)

The first victim of every war is “the human family’s innate vocation to fraternity”. (#26)

Persons or situations we find unpleasant or disagreeable are simply deleted in today’s virtual networks; a virtual circle is then created, isolating us from the real world in which we are living. (#47)

Jesus trusts in the best of the human spirit; with this parable [of the Good Samaritan], he encourages us to persevere in love, to restore dignity to the suffering and to build a society worthy of the name. (71)

Read more:
What is a social encyclical? Pope’s new letter is part of this treasury

There is a certain interplay between those who manipulate and cheat society, and those who, while claiming to be detached and impartial critics, live off that system and its benefits (75)

We should not expect everything from those who govern us, for that would be childish. We have the space we need for co-responsibility in creating and putting into place new processes and changes. (77)

[Jesus] challenges us to put aside all differences and, in the face of suffering, to draw near to others with no questions asked (81)

All of us, as believers, need to recognize that love takes first place: love must never be put at risk, and the greatest danger lies in failing to love (92)

We need to have “the courage to give a voice to those who are discriminated against due to their disability, because sadly, in some countries even today, people find it hard to acknowledge them as persons of equal dignity.” (98)

How much our human family needs to learn to live together in harmony and peace, without all of us having to be the same! (100)

Read more:
The theological heart of “Fratelli Tutti,” and where to find hope

Those who enjoy a surplus of water yet choose to conserve it for the sake of the greater human family have attained a moral stature that allows them to look beyond themselves and the group to which they belong. How marvellously human! (117)

As it is unacceptable that some have fewer rights by virtue of being women, it is likewise unacceptable that the mere place of one’s birth or residence should result in his or her possessing fewer opportunities for a developed and dignified life. (121)

There is a kind of “local” narcissism unrelated to a healthy love of one’s own people and culture. It is born of a certain insecurity and fear of the other that leads to rejection and the desire to erect walls for self-defence. (146)

Yet it must never be forgotten that “loving the most insignificant of human beings as a brother, as if there were no one else in the world but him, cannot be considered a waste of time” (193)

Approaching, speaking, listening, looking at, coming to know and understand one another, and to find common ground: all these things are summed up in the one word “dialogue”. If we want to encounter and help one another, we have to dialogue. (198)

The solution is not relativism. Under the guise of tolerance, relativism ultimately leaves the interpretation of moral values to those in power, to be defined as they see fit. (206)