The risk that fed a million kids: Magnus Macfarlane-Barrow talks about charity 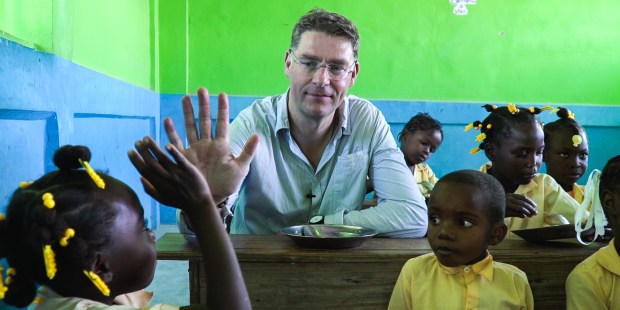 Most anyone living in a midsized to large city knows what it’s like to be approached by a panhandler. Apparently, the person is homeless or out of work and just needs a couple of bucks to get a meal or a bus ride back home. In the back of your mind, you might suspect the person really needs the money to get his next fix. And why can’t he find a job, anyway?

Nine times out of 10, the person being asked looks away.

But the founder of an international charity, who has just published his second book on giving, suggests that we might be taking the wrong approach.

Charity involves taking risk, says Magnus MacFarlane-Barrow, author of the new book Give: Charity and the Art of Living Generously.

That risk can be as simple as trusting the panhandler in front of you, or it can be represented by the chance you take by sending a donation to an established charity, not being 100% sure that the funds won’t be mishandled.

But, he said, charity is love, and if one is acting out of love, “we need to genuinely always try to seek what is best for the person in front of us, not just what makes us feel good at the moment. So it might be, if we’re well-informed about the situation, we might decide this is not the best thing, to give the person some money right now, because we know something about the situation that can really make us convinced that it wouldn’t help the person in the long run. But most of the time it’s not going to be clear cut. Most of the time there’s probably going to be questions, because we don’t really know about the person and their situation.”

In such a situation, one should err on the side of taking the risk, he said. “What’s the bigger risk — that that person really needed our help and we give it to them, or that we do give it to them and it turns out that they didn’t really need it or they don’t use it in the best way? So I think that love compels us to take the risk if in doubt.”

MacFarlane-Barrow’s whole life and career, it seems, is based on a risk he took in 1992, when he was and his siblings were watching a news report about the war in the former Yugoslavia. Because the family had been to Medjugorje about a decade earlier, an experience that transformed their lives, they were attentive to the news of civil war involving Bosnia-Herzegovina, the Balkan country where the alleged Marian apparitions took place.

“There was a report about a refugee camp very close to Medjugorje,” he said in a recent interview. “We began saying to each other, ‘Wouldn’t it be wonderful if we could do something even small to help those people.’ Before we even had a plan, really, we started asking people that we knew, ‘Would you give us food and clothing and all those basic things that people in the camps really needed?’”