Why St. Francis chose the Good Shepherd to inspire his community 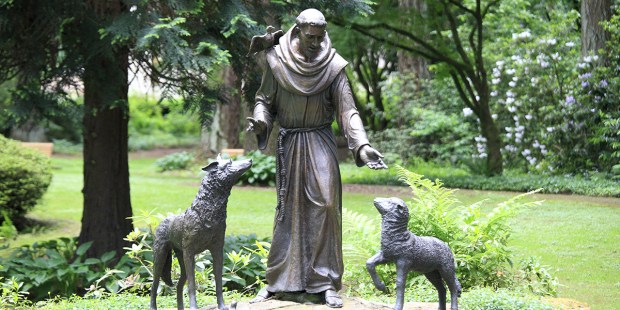 He exhorted his followers to imitate Jesus by following his example as a Good Shepherd.

Speaking to his newly formed community of followers, St. Francis of Assisi used a particular image to express how he wanted the friars to imitate Jesus Christ.

In his Admonitions, under the title of “Of the Imitation of the Lord,” St. Francis pointed to the Good Shepherd as the model to be followed.

Let us all, brothers, consider the Good Shepherd who to save His sheep bore the suffering of the Cross. The sheep of the Lord followed Him in tribulation and persecution and shame, in hunger and thirst, in infirmity and temptations and in all other ways; and for these things they have received everlasting life from the Lord. Wherefore it is a great shame for us, the servants of God, that, whereas the Saints have practiced works, we should expect to receive honor and glory for reading and preaching the same.

In this passage, St. Francis is referring to Jesus’ own words in the Gospel of John.

I am the good shepherd. A good shepherd lays down his life for the sheep. A hired man, who is not a shepherd and whose sheep are not his own, sees a wolf coming and leaves the sheep and runs away, and the wolf catches and scatters them. This is because he works for pay and has no concern for the sheep. I am the good shepherd, and I know mine and mine know me, just as the Father knows me and I know the Father; and I will lay down my life for the sheep. I have other sheep that do not belong to this fold. These also I must lead, and they will hear my voice, and there will be one flock, one shepherd. (John 10:11-16)

St. Francis was pointing out the love Jesus has for his flock and how he was willing to bear any suffering for our sake. He wanted his followers to do the same for the people they encountered, not boasting in their good works, but bearing every burden for the people they serve.

Similarly, in referencing this passage, St. Francis may have also been warning his community not to become “hired men,” who leave and run away from their sheep. They were to be “servants of all,” shepherds who would imitate Jesus’ own example.

He did not want his brothers to become prideful and consider themselves the source of their good works. Instead, he would repeatedly say that the only thing they could “glory” in was “in our infirmities, and in bearing daily the holy cross of our Lord Jesus Christ.”

The Good Shepherd is a beautiful image of Jesus Christ, one that still inspires many sons and daughters of St. Francis.

Read more:
How God was known as a “good shepherd” in the Old Testament

Read more:
These words of wisdom from St. Francis are startlingly relevant today