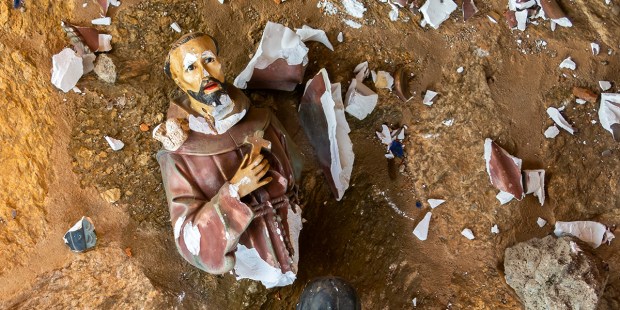 A four-fold rise in federal funds sought to counter rise in church vandalism.

With a recent rash of attacks on houses of worship in the United States, the Catholic bishops of the U.S. are asking for an increase in security funding from the federal government.

The U.S. Conference of Catholic Bishops’ (USCCB) Committee for Religious Liberty joined an interfaith coalition calling on Congress to increase funding for the Nonprofit Security Grant Program (NSGP). This program provides grants to nonprofits and houses of worship in order to enhance security through improvements to infrastructure, funding for emergency planning and training, upgrading security systems, and some renovation projects. While the program has been popular, lack of funding prompted many applicants for grants to be turned away in 2019. The coalition is calling on Congress to quadruple the total funding for the program to $360 million.

“Each of our communities believes that respect for human dignity requires respect for religious liberty,” the coalition’s letter read. “We believe that protecting the ability of all Americans to live out their faith without fear or harm is one of the most important duties of the federal government.

“We are grateful to Congress for establishing the NSGP program to better integrate nonprofit preparedness investments and activities within the broader whole community response to violent extremism. These security grants benefit people of all faiths. At a time of increasing extremism and antagonism towards different religious groups and religion in general, we believe significant increased funding for this important government program in fiscal year 2021 is imperative.”

Other groups joining the letter include the Union of Orthodox Jewish Congregations of America, National Association of Evangelicals, U.S. Council of Muslim Organizations, Lutheran Center for Religious Liberty, The Jewish Federations of North America, National Council of Churches in Christ in the USA, North American Division of the Seventh-day Adventists, Sikh Council for Interfaith Relations, Agudath Israel of America, and The Episcopal Church.

Recent incidents of vandalism perpetrated against Catholic churches include the spray painting of swastikas and other symbols on a Chaldean church in San Diego; the smashing of statues and stained-glass windows of a church in Tioga, Louisiana, and an attack on outside altars at a church in the Pilsen section of Chicago.

Read more:
Attacks on churches continue, leaving a majority of Catholics concerned, according to poll