Pope reflects on extraordinary “Urbi et Orbi”: Says he was afraid of slipping on the stairs 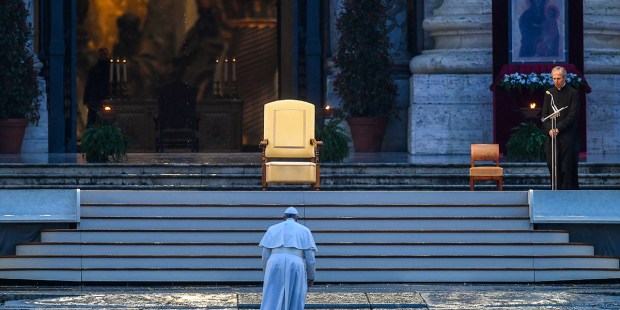 “I climbed the stairs praying. I prayed the entire time, and I went away praying. That’s how I lived that March 27th.”

The director of the Spanish edition of the periodical Il mio Papa, Carmen Magallón, interviewed Pope Francis in an article published Wednesday.

Vatican News summarized the extensive interview here. We share just one section, regarding the Holy Father’s prayer during the pandemic.

Magallón asked the pope about what was in his heart on March 27, in St. Peter’s Square, as he held the extraordinary Urbi et Orbi blessing.

Readers will recall that momentous night, in which the pope found a way to be present to the faithful, despite the lockdown as Italy endured the worst of its crisis.

Francis chose a unique act that only a pope can perform: the papal blessing “Urbi et Orbi,” which translates from Latin “to the city [of Rome] and to the world.”

It’s an act which no other bishop can perform, and which — in contrast to the Mass or other sacraments — can take place effectively through the media, for the good of the souls of the faithful.

The Vatican determined some decades ago that those who receive the pope’s “Urbi et Orbi” blessing through a live broadcast are eligible to receive its blessing, just as those physically present in St. Peter’s Square.

It seemed that God himself provided the backdrop for the event, as a gray and rainy night set the tone for the somber blessing.

Pope Francis told Magallón that at first he was afraid of slipping on the wet stairs of St. Peter’s Square. However, he continued, “my heart was with all the people of God who were suffering, with a humanity that had to endure this pandemic and, on the other hand, which had the courage to strive forward. I climbed the stairs praying. I prayed the entire time, and I went away praying. That’s how I lived that March 27th.”

The Holy Father sometimes walks with a quite notable limp as he suffers from sciatica, a condition usually caused by compression of a nerve in the back. Sciatica usually causes intense pain in the back and one leg, and already in the first year of his papacy, the pope spoke about it giving him trouble. “Sciatica is very painful, very painful! I don’t wish it on anyone!” he said, returning from the World Youth Day in Brazil.

Magallón also spoke with the Holy Father about his ministry during this time of social distancing.

The pope said that the General Audiences without the faithful were particularly difficult for him. “It was like talking to ghosts,” he said. “I made up for many of these physical absences with telephone calls and letters. That helped me to take the pulse of how families and communities were living this.”