Armenian cathedral is severely damaged in conflict with Azerbaijan

Renewed hostilities, which have claimed over 300 lives, involve religious site.

The Armenian Church has blamed the Azerbaijani military for shelling a historic cathedral in the disputed territory of Nagorno-Karabakh.

On its Facebook page, the Church, based in Etchmiadzin, Armenia, posted photos of a heavily damaged Holy Savior Cathedral in the city of Shushi. 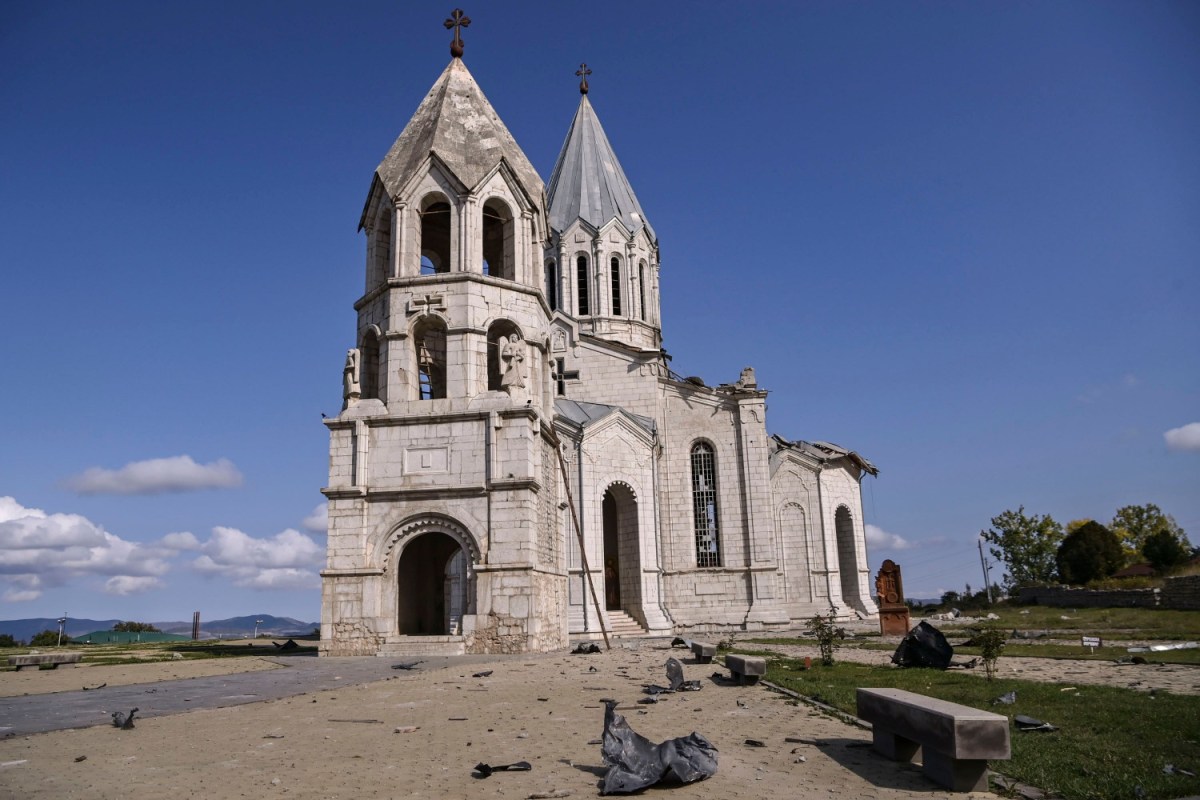 “The Mother See of Holy Etchmiadzin, condemning what happened and considering it as an extremely religious intolerance, calls on the pastors of Churches, international community and organizations, inter-church and intercultural institutions to raise a decisive voice for the sake of suspension of bleeding, free and independent life of Artsakh people,” the Church said in Armenian, with automated translation provided by Facebook. “Such disrespect of religious sacred feelings of faithful people and the purposeful target of prayers are directly contradicting all religious messages.”

According to a news outlet from India, the Deccan Herald, Armenia said Thursday that Azerbaijani forces had shelled the cathedral and that AFP journalists saw the church had suffered serious damage.

Both the Facebook page and the Deccan Herald report carried photos of the damage that were attributed to AFP.

“There was a gaping hole in the roof of the Ghazanchetsots (Holy Saviour) Cathedral, an iconic site for the Armenian Apostolic Church,” the Herald reported. “Rubble was strewn about the floor, pews were knocked over and the interior was covered in dust from parts of the building’s limestone walls that had been hit. A section of its metallic roof had collapsed and fallen to the ground outside.”

“Enemy Azerbaijan hit the symbol of Shushi — the Cathedral of Ghazanchetsots,” Armenian defense ministry spokesman Artsrun Hovhannisyan said on Telegram, using the Armenian name for the city, according to the Herald report. A local resident named Simeon was said to tell the French news agency, “There is no military, nothing strategic here, how can you target a church?”

Nagorno-Karabakh is a region in the south Caucasus, surrounded by Azerbaijan. The region, east of Armenia and north of Iran, is known to Armenians as Artsakh. It is mostly mountainous and forested.

According to the CIA World Factbook, the dispute over the Nagorno-Karabakh and the Armenian military occupation of surrounding lands in Azerbaijan “remains the primary focus of regional instability.”

More than 300 people have died and thousands have been displaced since the latest fighting broke out on September 27, according to the BBC.

France24 reported that in Nagorno-Karabakh’s main city, Stepanakert, residents have been using the Holy Mother of God cathedral as a bomb shelter.