Could Pope Francis be the next Nobel Peace Prize winner? 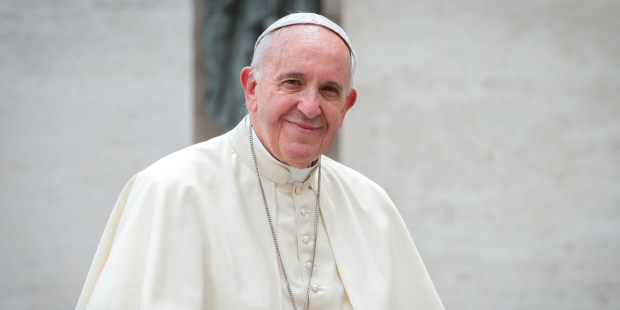 Check out this summary of all the reasons he’s a natural candidate!

Will Pope Francis succeed the Ethiopian statesman Abiy Ahmed, the 2019 Nobel Peace Prize laureate, and thus become the first pope in history to receive this award? Since his election in 2013, the Argentinean pontiff has made many gestures for peace and justice in the world. His latest encyclical, Fratelli tutti, published October 4, which represents a vibrant plea for human fraternity and social friendship, could serve to advance his cause.

Created in 1901, the Nobel Peace Prize will be awarded on October 9 to “to the person who shall have done the most or the best work for fraternity between the nations and the abolition or reduction of standing armies and the formation and spreading of peace congresses,” summarizes the founder, Alfred Nobel.

As every year since the beginning of his pontificate, the name of Francis has been discussed as being among the likely winners. His tireless action to put an end to conflicts in the world, to abolish slavery, the death penalty, and the use of nuclear weapons, his pastoral work on migrants and his gestures of friendship with Muslim leaders make him a legitimate candidate.

One of the first historic initiatives of Pope Francis was undoubtedly the organization of the interreligious prayer gathering which brought the Israeli and Palestinian presidents side by side in the Vatican gardens on June 8, 2014. A few months earlier, he had invited Christians to pray and fast for peace in the Middle East. In the opinion of some Eastern bishops, that initiative prevented a military intervention in Syria at that time.

Pope Francis and Vatican diplomacy have also worked to resolve or alleviate a number of crises. Among these is the restoration of diplomatic relations between Cuba and the United States in December 2014.

In some cases, the Bishop of Rome has not hesitated to get personally involved, as on that day in April 2019 when he kissed the feet of South Sudanese President Salva Kiir, a Catholic, and his opponent Riek Machar, a Presbyterian, to urge them to find the path of peace.

The use of nuclear weapons is “immoral”

Another argument in favor of the Successor of St. Peter is his repeated condemnations of the use of nuclear weapons. It’s a theme that the Nobel Peace Prize authorities advanced in 2017, by recognizing the action of the International Campaign for the Abolition of Nuclear Weapons (ICAN), which is led by several NGOs.

On the occasion of his trip to Japan in November 2019, the pope declared the use of these weapons “immoral.” In September 2020, explaining the Church’s position on the subject in a video message sent to the UN General Assembly, he stated that it was necessary to dismantle “the perverse logic that links personal and national security to the possession of weapons.”

In Fratelli tutti, his thinking is made perfectly clear: “the ultimate goal of the total elimination of nuclear weapons becomes both a challenge and a moral and humanitarian imperative.”

Read more:
Pope to Japanese: With you, I pray nuclear weapons will never be used again

Respect for the dignity of migrants

Pope Francis has also distinguished himself through his advocacy in favor of welcoming migrants. In July 2013, a few weeks after his election, he made his first trip outside Rome to the small island of Lampedusa in southern Italy, where he denounced the “globalization of indifference.” Since then, the Vicar of Christ has never ceased to renew his calls for the world to finally respect the dignity of uprooted peoples.

In September 2015, in the midst of the migration crisis, he asked that “every parish, every religious community, every monastery, every shrine in Europe welcome a family” of refugees.

His most recent encyclical is a powerful new challenge. Speaking directly to Europe, he declared that this continent “has the means to defend the centrality of the human person and to find the right balance between its twofold moral responsibility to protect the rights of its own citizens and to assure assistance and acceptance to migrants.”

Another campaign of the Supreme Pontiff is his fight against slavery and human trafficking. In 2014, during a meeting of religious leaders in the Vatican, Pope Francis signed a declaration declaring that “modern slavery, in terms of human trafficking, forced labor and prostitution, organ trafficking, and any relationship that fails to respect the fundamental conviction that all people are equal and have the same freedom and dignity, is a crime against humanity,” and must be recognized as such by all nations. He has repeated this condemnation in numerous audiences and Angelus addresses.

In Fratelli tutti, the Pontiff writes that he wonders why it took “so long for the Church unequivocally to condemn slavery and various forms of violence.”

The death penalty is no longer admissible

The universal abolition of the death penalty is also a profound desire of the Successor of Peter and his administration. While the Catechism of the Catholic Church formerly recognized that the death penalty was not totally ruled out if it was the only practicable means of protecting innocent people from the criminal, in 2018 Francis called for a clarification in this aspect of the Church’s teaching, given modern means of incarceration. In his eyes, the death penalty is “inadmissible because it wounds the inviolability and dignity of the person.”

The Argentinean pontiff also noted that today all states are able to find other effective means to put a criminal out of action.

The pope and peace among religions

Pope Francis is also known for his action in favor of peace between religions. For him, violence has no foundation in religion and the vocation of all believers is “worship of God and love for our neighbor,” he emphasizes in Fratelli tutti.

In February 2019, during his trip to Abu Dhabi (United Arab Emirates), the head of the Catholic Church signed—along with Ahmad Al-Tayyeb, the great Imam of Al-Azhar—an historic “Document on Human Fraternity for world peace and living together.” It was a powerful gesture in a decade marked by Islamist terrorism.

Against the current thinking that aims to exclude religion from the political arena, Pope Francis also insists in his latest encyclical on the place that religious leaders must hold. Without engaging in partisan politics, they must be “constant attention to the common good and a concern for integral human development.”

Read more:
“To kill in the name of God is satanic,” Pope Francis says at Mass offered for Fr. Jacques Hamel

Pope Francis does not seek a prize

The causes led by Pope Francis and his Vatican diplomacy team naturally make him a potential Nobel Prize winner. His repeated calls—especially during the coronavirus pandemic—for military truces, and his detestation of war, even going so far as to question the expression “just war,” obviously go in this direction.

Nonetheless, a decision to award this prize to the head of the Catholic Church would not go uncriticized. On this subject, the pope swept the issue aside in July 2014, saying that being awarded this recognition someday was not part of his “agenda.” “Without disparaging them, I never wanted to receive doctorates or prizes,” he explained at the time.

Read more:
From the hell of Daesh to the Nobel Peace Prize … via the Vatican