Franciscan who stayed in war-torn Syria dies of COVID 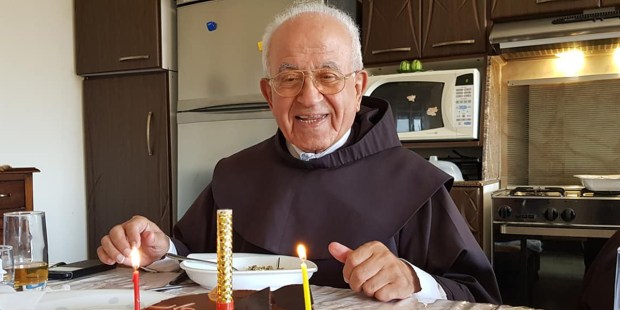 “It was his mission to be beside people who suffer,” superior says of Fr. Tamer.

A Franciscan priest who refused to leave the dangers of Syria at the height of its recent war died of COVID-19. Fr. Edoardo Tamer was 83.

The New York Times, which has been writing about prominent people who succumbed to the illness, reported this week that the priest died August 12.

Fr. Tamer was a Maronite Christian, born in 1937 in Sir El Danniyeh in northern Lebanon. He sensed a calling to the religious life from an early age.

“He was convinced that he was called from God to be a friar and specifically a Franciscan,” Fr. Firas Lutfi, the Franciscan regional minister for Syria, Lebanon and Jordan, told the Times.

Fr. Tamer became a novice at the Friary of St. Catherine in Bethlehem, in the West Bank, in 1956. Nine years later he was ordained a priest in Jerusalem. He earned a license in theology at the University of Saint Joseph in Beirut.

Over the next four decades he served at schools, colleges and parishes in Harissa, Lebanon; Amman, Jordan; Latakia, Syria; Alexandria, Egypt; and Jericho, in the West Bank. He was assigned to the Monastery of St. Anthony of Padua in Aleppo, Syria, in 2007 and served as the superior and the director of the parish recreation center.

Fr. Lutfi said Fr. Tamer liked to hear confession in order to give people “hope and peace,” the Times said. “He was skilled at translating religious texts from Italian into Arabic, most notably ‘The Mind’s Road to God,’ a medieval treatise on spirituality by Saint Bonaventure.”

Civil war in Syria broke out in 2011, leading to a bombing campaign by the Syrian government and its Russian allies against armed rebels that destroyed entire neighborhoods in Aleppo. The city’s Christians, long a small minority and divided among different sects, emigrated in large numbers during the war. Estimates of the number of remaining Catholics are in the thousands.

But Father Tamer insisted on remaining, celebrating Mass, welcoming visitors and at times taking in people seeking refuge from the fighting.

“He said, ‘I will live here and I will die here if that is what happens,’” Fr. Lutfi told the newspaper. “He decided to stay in Aleppo during this very critical situation.

“It was his decision to stay and continue his service despite the bombardment and the war and disease,” the superior continued. “It was his mission to be beside people who suffer.”