Beyond Juan Diego and Kateri: Meet other indigenous American saints 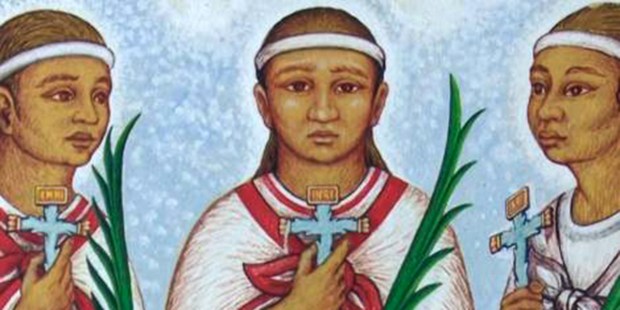 These holy men and women — and children — responded to God’s call in the New World.

Most of us know St. Juan Diego Cuauhtlatoatzin (the married Aztec farmer to whom Our Lady of Guadalupe appeared), who became the first Indigenous American Saint in 2002. He was followed a decade later by St. Kateri Tekakwitha, an Algonquin-Mohawk woman whose holiness was marked by simple faithfulness. But there are many other Indigenous American saints (and saints-to-be), heroes of the faith who embraced Christianity without rejecting the beauty of their own cultures.

The Martyrs of Tlaxcala, Sts. Cristobal (1514-1527), Juan (1516-1529), and Antonio (1516-1529), were the first martyrs in the Americas. The three Tlaxcalan children lived in what is now Mexico and converted to Catholicism even before Our Lady of Guadalupe appeared to St. Juan Diego in 1531. After Cristobal’s conversion, he began trying to convert his family. His father was patient at first with his 12-year-old son, but when Cristobal began breaking the family’s idols, his father plotted to murder him. Encouraged by his new wife, the man beat and burned his son, who died the next morning forgiving his father. Like Cristobal, Juan and Antonio were converted by Franciscan missionaries. Antonio was the grandson of a Tlaxcalan noble and Juan was his servant. The two were caught destroying idols and were clubbed to death by an angry mob before their bodies were thrown off a cliff.

Read more:
Meet the martyrs of Tlaxcala, 12 years old and ready to die for their faith

Blessed Jacinto de Los Angeles and Blessed Juan Bautista (both c. 1660-1700) were members of the Zapotec tribe in what is now Mexico. Both were altar servers as children and later married, had children, and began to serve as catechists and leaders in the Christian Zapotec community. When they discovered that some of their compatriots had planned to hold a ritual involving idol worship, Jacinto and Juan arrived at the ceremony, Dominican friars in tow, to break it up. Realizing the next day that their lives were now in danger, the two took shelter in the Dominican friary. But when an angry mob arrived demanding the right to punish their own, Jacinto and Juan handed themselves over in order to prevent further bloodshed; the Dominicans were spared but Jacinto and Juan were martyred.

Servant of God Antonio Cuipa (d. 1704) was the son of a Christian Apalachee chief in present-day Florida; educated by Franciscan missionaries, Antonio went on to become a leader in his community, second-in-command over the thousands of Native Christians associated with his mission. He was a husband and father of two, a hard-working carpenter, a flautist, and an evangelist. Though he often accompanied the missionaries as they evangelized local people, Antonio also left them behind at times, knowing the antipathy many Native Americans had toward men who looked like those who had attacked and enslaved them. Antonio and his Native friends would approach nearby communities, whereupon Antonio would play his flute. When the people were suitably impressed, he would offer them wooden flutes he had carved himself. Only then would he begin to preach the Gospel, starting at places of commonality between Christians and those who followed traditional Native spiritual practices. Antonio was ultimately martyred, during which suffering he experienced the first recorded Marian apparition in what’s now the United States. His cause is being promoted alongside dozens of other Indigenous martyrs from the Southeastern United States (along with many of the martyred European missionaries who witnessed to them) as the Martyrs of La Florida.

Read more:
Did you know the state of Florida was named for Palm Sunday?

Blessed Ceferino Namuncurá (1886-1905) was the son of the chief of the Mapuche tribe, an Indigenous community in Argentina known for their resistance to Spanish colonialism. Ceferino lived with his tribe until he was 11 and then was sent to Western schools so that he could better help his people. Despite enduring racism at the hands of the Christians around him, Ceferino was admired by his classmates, who compared him to St. Dominic Savio. He entered the seminary with the Salesian order but soon contracted tuberculosis and died at 18.

Servant of God Nicholas Black Elk (1863-1950) was a Lakota convert to Catholicism who became a catechist. The second cousin of Crazy Horse, Black Elk traveled with Buffalo Bill’s Wild West Show and fought at Little Bighorn and Wounded Knee. Black Elk served as a medicine man in his youth, and later incorporated Lakota spirituality into his preaching and evangelization, which brought some 400 people into the Church. Black Elk refused to accept the adage (often embraced by Catholic missionaries) that saving the man required killing the Indian; to the end of his life, he continued to be a proud proponent of Lakota culture, seeing no conflict between his culture and his faith.

The Lay Martyrs of Quiche (d. 1980-1991) are seven lay K’iche’ Mayan men from Guatemala who were declared martyrs in early 2020 and are set to be beatified soon. All seven Venerables were martyred during the Guatemalan Civil War, alongside three Spanish priests of the Missionaries of the Sacred Heart. Included among their number are Venerable Juan Barrera Méndez, a 12-year-old boy, and six married men, who served as translators, catechists, extraordinary ministers of Holy Communion, and nurses.