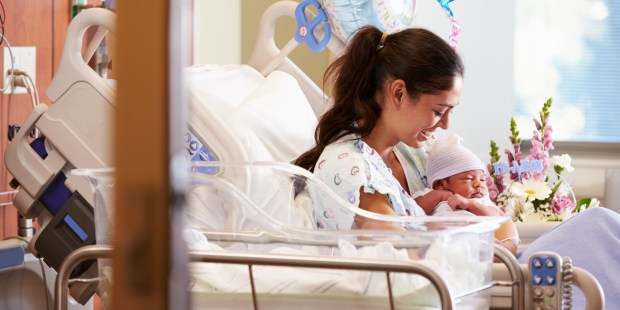 Jennifer Erickson, an elementary school teacher near Chicago, wasn’t planning to unearth and revive a centuries-old Italian custom. But when she accidentally found out about the tradition, she knew she had to find a way for it to make a comeback.

The custom Erickson is re-introducing to a world that’s mostly forgotten it is called “desco da parto,” and refers to a special painted platter, or tray, created for the purpose of caring for a newly postpartum mother. Erickson said,

“These trays were brought into the birth chamber with necessities not only for the newborn child but also for the attendants and the new mother herself. Then the trays could be set aside for special occasions, like wedding china, or brought out for birthday celebrations, or be in everyday use at the family table.”

The platters held great emotional significance for the family, and became treasured heirlooms:

“Wealthy families welcomed desco da parto as a gift and art. The platters were often round or hexagonal in shape, and one side depicted a birth related image — a literary scene, a saint’s birth, an icon of infants. When the famous artist Florentine Lorenzo de Medici died, the desco da parto his mother received at his birth was still hanging on his wall!”

These “birth trays” tells us something fascinating about how Renaissance culture approached new motherhood. The trays were for the mother, not the child. In an era when childbirth was much more dangerous than it is today, when infant and maternal mortality levels were high and “maternity leave” didn’t exist, society had certain formal rituals to honor a new mother’s ordeal, with all the strength and sacrifice it required. And these works of art “acknowledge a new mother’s needs for nourishment, physically and aesthetically,” Erickson said.

In this way, the platters also bear witness to the role of the family and community in caring for the new mother herself as she recovered from birth.

“In our culture, ritual and tradition has given way to quick and convenient,” Erickson said. But pregnancy, birth, and caring for a baby are the opposite of quick and convenient processes. “Children do not magically appear; they appear only after nine months of nurture inside a mother. This gave me pause: Perhaps it takes a village to raise a mother.”

Remarkably, the society in which desco da parto developed was not unlike our own. Like us, they were recovering and navigating a new normal after medieval plagues. Perhaps this societal confrontation with death gave renewed respect for those who bring new life.

“I wondered if perhaps, like the population recovering from plagues in Renaissance Italy, we too could revive this lost art,” Erickson said. “Instead of dropping off a grocery bag of food or sending a gift card for DoorDash, family and friends could resurrect the ritual of presenting a platter instead.”

Desco da parto “serves as a timeless tribute to the multifaceted art of mothering,” Erickson said. Reviving this tradition is a meaningful and beautiful way to honor new mothers.

Read more:
How to recover from childbirth at your own speed