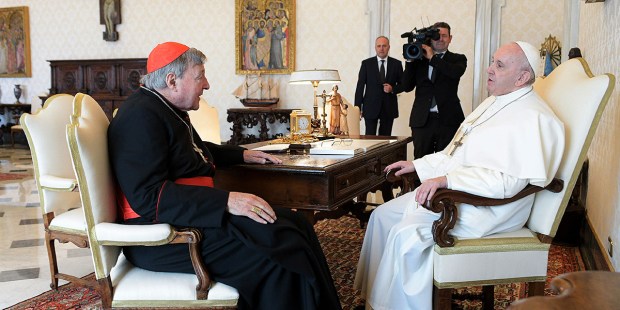 79-year-old cardinal back in Rome after three-year absence to establish his innocence in sexual abuse case.

“It went very well,” the Australian cardinal, 79, commented to Vatican reporters afterward, though he did not add details about what was discussed.

This is the first official meeting between the former prefect of the Secretariat for the Economy and the pontiff since Pell’s departure for Australia in 2017. Pell has been back in Rome for less than two weeks.

At the start of their near 30-minute exchange, Pope Francis thanked the cardinal for coming.

“A year!” exclaimed the pontiff, in reference to the 400 days the cardinal spent in jail.

Accused of sexual abuse, Cardinal Pell returned to Australia in 2017 to appear in court.

He was sentenced to six years in prison, but was released on April 7 after completing just over a year of the sentence, when the Australian High Court decided that the evidence was insufficient.

That court, composed of seven judges, criticized the inconsistencies of the Court of Appeal’s ruling and unanimously exonerated Cardinal Pell.

On the day of the verdict, without mentioning Cardinal Pell, the pope during his daily Mass made a call for prayer “for all those who suffer unjust judgment.”

The return of Cardinal Pell to Rome comes a few days after the resignation of Cardinal Angelo Becciu as prefect of the Congregation for Saints’ Causes on September 24 because of financial mismanagement charges.  Rumors circulated in the Italian press that Becciu had financed Cardinal Pell’s accusers, however Cardinal Pietro Parolin, the pope’s secretary of state, denied any connection between the “Becciu affair” and the Australian cardinal’s return.