Every heart’s worth saving

The incredible story of a young woman's mission to bring hope to infants with Down syndrome.

Then again, Lauren Costabile isn’t your average, everyday, young woman. And neither was the problem she encountered.

Her story began with a chance encounter while volunteering at a camp for those with disabilities.

“I didn’t know anyone and was in a room with hundreds of people. I was 17 and shy. I made eye contact with a boy across the room with Down syndrome, and he gave me a huge smile. Before I knew it, he was running towards me and gave me a huge hug! He could sense that I needed a friend, that my heart needed that. I spent a lot of time with him, got to know him, and that kind of supernatural gift he had to read people’s hearts and to be able to comfort them.”

Moved by the encounter, she served the Down syndrome community, teaching dance and art classes in New York and New Jersey. But it wasn’t until 2017, on a trip to Uganda, that she would be confronted with a painful reality she didn’t expect.

“In Uganda, I visited the Down Syndrome Community, and I visited about 20 kids … and what I remember from that camp was that people had these huge scars on their chests … I asked the director ‘what is that?’ and he said, ‘People with Down syndrome are prone to this heart defect’ and that’s where I first learned about it, and it really took me by surprise, and that particular need kept coming up in my heart.” said Costabile, “So when I visited these people in their homes, in their mud huts, I kept asking them about their heart defect, and that kind of threw me, that God kept putting that on my heart for me to ask.”

About half of all children born with Down syndrome will suffer from some form of congenital heart defect, which can be detected in-utero by echocardiogram after 20 weeks or after birth. But in countries where access to prenatal care isn’t readily available, early diagnosis is rare. And children often go undiagnosed with this life-threatening condition.

As Costabile traveled throughout the region, she witnessed firsthand the challenges that families faced. Many parents did not understand the realities of Down syndrome or how to provide care. And in the worst situations, there was rejection. “There’s a huge stigma in Uganda and most developing countries, that because this child has a disability, they’re not worthy, they don’t have value, and they’re a curse on them and a burden to the family.” 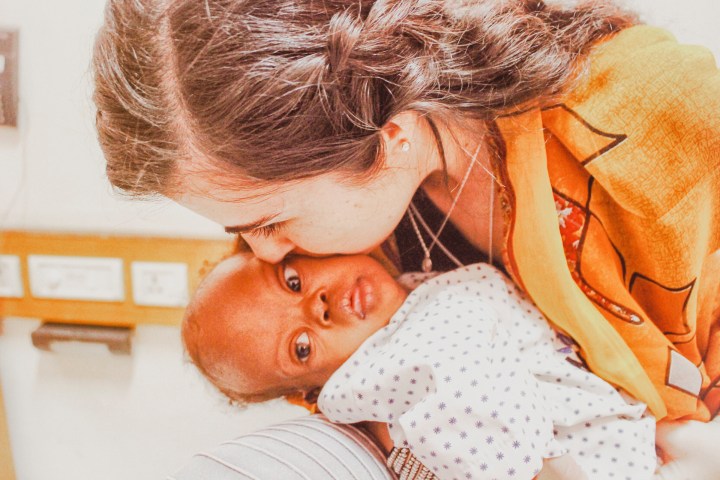 “The last baby that I visited was about 6 months old. I held her, and I could feel from the way she was breathing that she had a heart defect … I just knew. And I felt the call from God, “Lauren, help this one baby …” So I said OK.”

She quickly set up a GoFundMe page to raise money for the life-saving surgery for Ellie, and once she reached the goal, she received news that there was another child named Penny who suffered from the same condition. Her response? “We’re going to help both of them.”

But an unforeseen problem would arise: The hospital in Uganda wouldn’t perform the surgery.

The intercession of a saint

“I love Mother Teresa, so I asked for her help. When SHE prayed, she would pray with such confidence because she knew this [her mission] was God’s will. She would pray ‘If this is what you want, please provide, or we need this, or we need food for this home,’ or whatever it was, and so I prayed like her and I said, like, ‘Lord, send me a hospital because we have nowhere to send them.'”

Shortly after, she received an email from a hospital willing to conduct the procedure. The only catch was that the hospital was in India, which presented new challenges.

“I thought, ‘Oh, Mother Teresa was from India, that must be a sign!'” but it was the closing line of the email that stopped her cold. It read “… the man who founded this hospital was a doctor named Dr. Devi Shetti, an Indian cardiologist, and he was Mother Teresa’s personal cardiologist for the last 5 years of her life.” To which Lauren reacted, “Dear Lord! How you love these babies so much!”

After the operations, she searched for an organization that provided these life-saving surgeries specifically for children with Down syndrome. She found none. So she founded her own. And since March of 2019, Lauren and her organization Hearts of Joy International have provided 25 surgeries for children worldwide, and now have a waiting list.

“These children need to be treated with dignity and respect, and they need to access to the quality of care that you and I would. I don’t care where they live, I don’t care what country they’re from or how much money their parents make … none of that matters or qualify in the eyes of God, and I wanted an organization where we see things through the lens of God.”

The heart of a saint

Lauren’s desire to seek and follow God’s will has taken her on an adventure that’s only just begun. It’s a mission that brings hope and dignity to those who are all too often shunned by society, even their own families, through no fault of their own.

What those who have Down syndrome lack certainly isn’t a loving heart. Their bright smiles and warm hugs testify to this. But to bring the joy, acceptance, and warmth they offer to the world, they need help. And Lauren fights for them every day because she knows in her own heart that every heart is worth saving.

For those interested in learning about or supporting Hearts of Joy International in their life-saving mission, please visit their website.

Read more:
See what this adorable 2-year-old with Down syndrome has achieved in lockdown