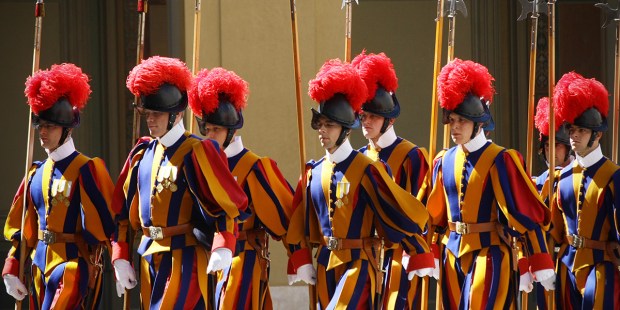 The entire Guard will be confined to their quarter of Vatican City.

Six members of the Swiss Guard, the elite military and honor guard assigned to protect the pope, have reportedly tested positive for Covid-19, Swiss media outlet RTS announced on October 12, 2020.

The entire Guard will be consigned to their quarter of Vatican City. Family visits and leaves will be suspended. Also according to the Swiss media, the protectors of the pope will only have the right to leave their barracks to fulfill their duties at the gates of the Vatican.

The Guard had until now not suffered any cases of Covid-19 since the start of the pandemic. Questioned the day before their swearing-in which was held on October 4, two young guards had confided to I.MEDIA that their Corps had, since the start of the crisis, redoubled their vigilance, especially when they had to meet Pope Francis. “We thoroughly disinfect our hands before greeting him,” they explained, for example.

It is impossible to say that the coronavirus contamination of the soldiers of the Guard occurred during the swearing-in ceremony. It took place under exceptional conditions. Traditionally bringing together more than 2,000 people – families and friends – around the young recruits, this year’s ceremony was held in small groups. Only 220 people were allowed at the ceremony.