Pope opts for greeting pilgrims at a distance 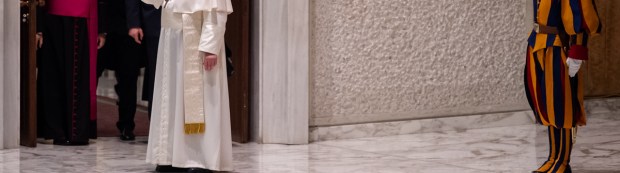 Pope says respecting regulations set by authorities as good citizens can help bring the pandemic to an end.

Respecting regulations set by health authorities will help put an end to the pandemic, said Pope Francis during the general audience on October 14 in Paul VI Hall.

The pontiff offered this explanation for his choice to greet the pilgrims at a distance, changing his practice since general audiences began again of walking along the aisle to bless the faithful.

“I would like, as always, to come down and greet you. But, with the new regulations, it’s better to stay at a distance,” he said at the end of the audience. “I’m sorry to greet you from afar, but I think that if we, as good citizens, respect the regulations of the authorities, it will help to put an end to this pandemic,” he said.

He explained: “When I come down, everyone comes closer and piles up. And that’s a problem because there’s a risk of infection.”

“I greet the sick from here,” added the pontiff, before crossing the stage, remaining about ten yards in front of the pilgrims. “You are seated at a prudent distance, as is fitting,” he noted.