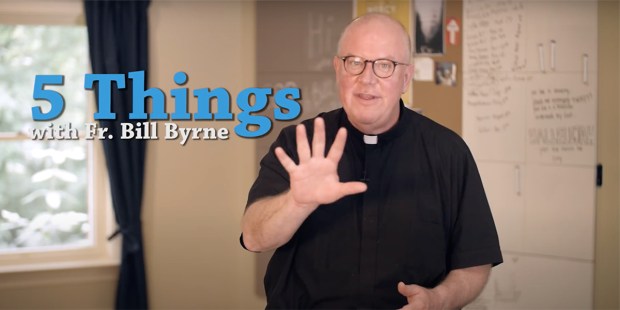 Fr. William D. Byrne is known for his ‘5 Things’ series.

The newest leader of Catholics in southern Massachusetts is a veteran YouTuber.

Bishop-elect William D. Byrne has spent a good deal of his priesthood in Washington, D.C., offering advice over the social media platform. Pope Francis appointed him bishop of the Diocese of Springfield, Massachusetts.

The short videos offer advice, tips and insights into all kinds of everyday phenomena. In one, he muses on how his dog makes him a more godly person.

“For almost a decade, popular priest and YouTube personality Fr. Bill Byrne wrote a column titled ‘5 Things’ for his local church newspaper featuring five life hacks, prayer starters, or spiritual meditations to help readers grow closer to God and appreciate the small — but vital — things in life,” said promotional material for the book. “Now, in a practical and engaging guide to embracing happiness, 5 Things with Father Bill features 50 topics to enhance ordinary days and holidays with insights, reflections, and encouragement.”

The 56-year-old priest has a wide variety of experience in the nation’s capital, including starting a ministry to Catholic members of Congress while he was pastor of St. Peter’s parish on Capitol Hill.

He also taught homiletics to seminarians studying at the Pontifical North American College in Rome for nine years and served as chaplain at the University of Maryland. In 2007, he was the homilist for a Mass with 20,000 Catholic youth and their leaders the night before the annual March for Life in Washington. Since 2015, he has been pastor at Our Lady of Mercy Parish in Potomac, Maryland.

A graduate of the College of the Holy Cross in Worcester, Massachusetts, he worked as a teacher for three years before studying for the priesthood. He studied at the Pontifical University of St. Thomas Aquinas (the Angelicum) and the North American College in Rome and was ordained on June 25, 1994.

His sister is Sister Deirdre Byrne, who recently spoke at the Republican National Convention. An uncle, Thomas Byrne, was U.S. Ambassador to Norway in the Nixon and Ford administrations.

Bishop-elect Byrne will be installed at Springfield’s Cathedral of St. Michael the Archangel on December 14.