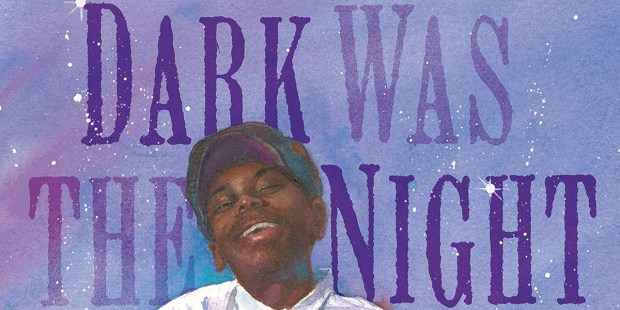 ‘Dark Was the Night,’ a new book by award-winning children’s author Gary Golio, explores the life and legacy of one of the most influential blues musicians.

Hurtling through space at a speed of about 17 km/second, currently about 14 billion miles away, The Voyager 1 space probe carries with it a golden disc that bears an eclectic collection of world music: including classical masters like Bach and Beethoven, the sounds of the Peruvian panpipes, Native American chant, and a wordless tune of loneliness and longing by legendary bluesman Blind Willie Johnson, called “Dark Was the Night.”

Johnson’s song and its presence on Voyager 1 is the subject of a new illustrated book, Dark Was the Night: Blind Willie Johnson’s Journey to the Stars. Written by award-winning children’s author Gary Golio, a student of music history who brings the tales of some of the most famous musicians and artists to life through excellent storytelling and beautiful illustrations, the biographical picture book follows Johnson’s life from childhood and recordings to his prevailing legacy, which now treks the stars.

Dark Was the Night highlights the enduring faith of Willie Johnson, who learned to sing in church. This piety was reflected in his music, for which Johnson often drew its lyrics from biblical narratives or religious epiphanies reached through deep introspection. The tale is seamlessly sewn together by the gorgeous illustrations from the expert hand of artist E.B. Lewis, who captured more expression in watercolor than we ever thought possible.

Gary Golio was kind enough to sit down and discuss Dark Was the Night with Aleteia.

What inspired you to write about the life of Blind Willie Johnson?

I’ve been a blues-music lover — and blues player — for many years now, so Willie Johnson was always in the air. He’s been covered by folks like Lucinda Williams, Tom Waits, Eric Clapton, and Jimmy Paige, but it was major articles by two Texas journalists a while back that really inspired me to write the book. So much time and energy has been devoted to uncovering the details of Willie’s life over the course of decades that this has only deepened the mystery of his legacy.

For me, it’s not even the unknowns about his time on Earth that are as fascinating as the depth of his feeling and faith, his tireless journey to be and become a good human being. His song, “Dark Was the Night,” included on Voyager I’s Golden Record, has been called “the embodiment of human loneliness,” a wordless cry from the heart to the heavens (or outer space). And yet you only have to listen to Willie’s “It’s Nobody’s Fault But Mine” to understand what he understood — that how you live your life, and the sense of spirit you bring to it, is your responsibility alone.

Traditionally, picture books are created with kids in mind, Is Dark Was the Night intended for a younger audience? If so, how do you think children of the current generation will respond to such exposure to old fashioned blues?

I never “write down” to young readers, and in fact I try to tell a story in words that will appeal to anyone of any age. Dark Was the Night is told in the second-person, as if I’m speaking to Willie himself (or his spirit), recounting his life and telling him how it all turned out. It’s very much about the unexpected paths that a life can follow, and how we often don’t know, in the end, what influence we have on others.

Willie died in poverty, was pretty much forgotten for decades, and then after being “rediscovered” during the 1960s folk music revival, had his song chosen by Carl Sagan to include on the Golden Record. I think stories like this appeal to kids of any era, depending on how you tell the tale. There has to be some drama and a sense of mystery in the writing, and of course the stunning artwork by E.B. Lewis brings the words to life (and living color!).

Which Blind Willie songs, besides “Dark Was the Night,” would you suggest for readers who want to explore more of his catalog?

Besides “Dark Was the Night,” my two other favorites of Willie’s are “The Soul of A Man” and “Nobody’s Fault But Mine.” He also sang a song called “If I Had My Way (I’d Tear This Building Down),” about Sampson and Delilah, which (one story goes) caused him to be arrested in New Orleans when he unintentionally stirred up a crowd of listeners on the street and nearly caused a riot! But if you want to hear a great cover of “Nobody’s Fault But Mine,” listen (on YouTube) to Nina Simone sing that song — it’ll bring tears to your eyes.

How would you say that Blind Willie’s faith impacted his musical style, especially when considering the duality of his blues being viewed as inconsistent with church music, as you noted in the book?

Willie — himself a lay preacher for his adult life — never veered from singing what he saw as gospel music. He didn’t think of himself as a blues singer, especially because his message was always about faith, and calling people to lead a good life. The fact that he had such a powerful and stirring voice — and was uniquely talented with his slide guitar sound — added to his renown, but he had decided at age five that spreading the Word was his life’s mission. Even after he finished recording in 1930, he sang in churches throughout Texas and other states for the next 15 years. That said, the blues is also uniquely suited to a Christian message, that of a soul crying out for support and redemption.

Blues as a genre has had a tremendous influence on modern music. How do you think the music scene would have developed had Blind Willie Johnson not pioneered the slide guitar?

Well, many highly respected musicians and guitarists (again, like Clapton, Paige, and Lucinda Williams) cite Willie as the greatest slide guitarist of all time, primarily because of the multitude of tones he brings forth from his slide playing, and its almost speech-like quality. That’s why a song like “Dark Was the Night” is so powerful, even though Willie doesn’t sing, but only hums.

Historically, Willie was only the second person to record slide guitar in the early days, although other musicians like Robert Johnson and various Delta bluesman played great slide guitar. Still, it’s the mysterious quality Willie brings to his playing — driven, I think, by the intensity of his faith — that made him such an influence on those who came after.

Out of all the musicians who could have been chosen to appear on the Golden Disc of Voyager I, why do you think Blind Willie Johnson was included among classical and world artists?

The real reason Willie’s song ended up on Voyager I is because Carl Sagan was wise enough to ask music historian Alan Lomax to look over the selections he’d already made. Essentially, Lomax said, Beethoven and Bach are great, but you really need some rare and unusual music — like Navajo chants, Peruvian panpipes, and African drumming. And this very mysterious song, “Dark Was the Night,” by this fellow named Willie Johnson, because it speaks to the loneliness all humans feel at one time or another. So kudos to both Carl and Alan for being so bold!

How do you think Blind Willie would have reacted to know his tune was traveling through space?

Haha, Willie would probably be very surprised to know that the wordless song of a blind man — someone who thought about darkness and light, life and the heavens — ended up sailing through the depths of outer space, touching (if you will) the face of G*d and bringing its own light to the darkness for eternity. Which is why, in the book, I’m telling Willie what happened after he died, to kind of surprise him.

Voyager I is carrying music with the goal of sharing human culture, should the spacecraft ever be found by intelligent life forms from other planetary systems. If this were to actually happen, how do you think these life forms would react to the music of Blind Willie Johnson?

Extra-terrestrials might find Willie’s sounds to be other-worldly (from their point-of-view), or they might find him incomprehensible. For me, what matters is not whether alien beings ever come upon the space probe and Golden Record, but rather the effect that our knowing Willie’s story — that his song is on that record, out there in space — deepens the mystery of our lives here on Earth. And again, it also says something about the unexpected course of human existence, and how we can never know what our influence will be. That’s a hopeful thought!