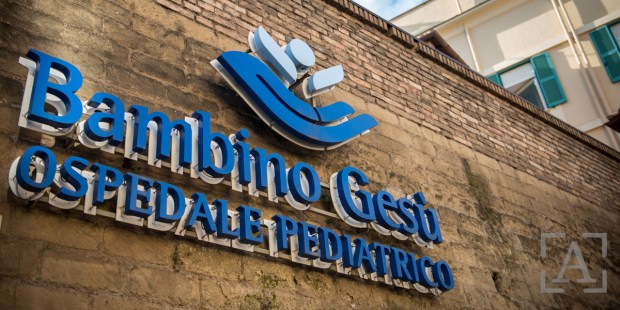 Bambino Gesù draws patients from across Europe and beyond.

Thanks to the excellence of its doctors, its state-of-the-art technology, and its international influence, the Bambino Gesù in Rome is considered one of the best pediatric hospitals in Europe and perhaps in the world. It’s a reputation that is undoubtedly due to a unique culture … based on humility.

Families come from far away, accompanying their children in wheelchairs. There’s a parade of endless white coats and the cries of children playing in the open air: It is a veritable little town that wakes up this morning on the Janiculum Hill, overlooking the Eternal City.

It’s a peculiar town, since the hospital—created in 1869 by the Salviati family and donated to the Holy See in 1924—only takes in children, in accordance with its original vocation. Behind these walls, nearly 700 doctors with multiple specializations are active every day at the service of the youngsters.

At the end of one of the corridors of the immense structure, Massimiliano Raponi, health director, works behind closed doors. He receives us between two appointments.

A phone call interrupts our conversation. “Yes, madame president?” The Italian answers without the slightest hesitation. At the other end of the line, the charismatic Mariella Enoc, director of the prestigious pediatric establishment, needs to speak urgently with her right-hand man. There’s no reason to keep her waiting; for the health director, the leadership of the hospital’s so-called nonna (grandmother, in Italian) remains one of the keys to its success. Far beyond encouraging her troops to achieve technical prowess, this Italian woman — much appreciated by the current pontiff — spreads a state of mind and values found nowhere else.

“When you start working at Bambino Gesù, you immediately learn that you’re there to serve the children,” sums up the director, a man in his 50s with communicative enthusiasm. “Humility is a fundamental virtue that makes it possible to overcome the individualism and selfishness that each of us carries within. When this requirement is embodied at the top, a great movement is naturally created,” he explains. “A pediatric hospital, if it aims at profit, is lost. Here, success means putting a smile back on the faces of patients and their families.”

This very demanding code of values brings with it a moral duty, he continues, to constantly strive to give the best for these sick children. In concrete terms, the pediatric hospital has therefore decided to make innovation and research one of its areas of excellence, building up an international reputation over the years. Like a huge beehive swarming with people, more than 400 researchers work every day to try to find cures for the world’s rarest childhood diseases.

And to encourage this kind of research, the hospital is betting on internationalization and teamwork, explains Raponi: “In recent years, we’ve worked with young thinkers who have had experience in other hospitals abroad, in England, France or the United States. All these cultures have come to the hospital and have created an important movement of collaboration in all sectors.” Supported by the management, these men and women also benefit from ongoing training.

A pioneering hospital for organ transplants

However, researchers aren’t enough if the hospital doesn’t have the capacity to apply innovation on a daily basis, he says. That’s why the Bambino Gesù makes it a point of honor to train practitioners of the health and technical professions, the nurses and nurses’ aides who support the little patients every day. The demanding ethics of the pediatric hospital associated with this culture of research and this desire to continue to train all the staff have made it the most important pediatric center in Europe for organ and tissue transplants. In Italy, about 30% of transplants on young patients are performed here.

Thanks to Mariella Enoc’s efforts, the Bambino Gesù has also developed a special skill in caring for conjoined twins, explains Raponi, noting that four cases have already benefited from their care.

The latest to date are twins from Bangui: two conjoined sisters joined at the skull and successfully operated on in June 2020. “This extraordinarily complex operation was made possible thanks to great teamwork from the moment the girls were diagnosed,” says Andrea Carai, one of the surgeons who worked on this ambitious project. All the skills available at the institution, from the psychology department to the plastic surgery department which had to invent a way to “close” the children’s skulls, were mobilized.

Nothing would have been possible without the hospital’s cutting-edge technology. In particular, 3D software makes it possible to accurately simulate the maneuvers to be carried out by reproducing exactly the situation that the surgeons will encounter. “In this way, the surgeon is already on the battlefield before the operation,” explains Carai, knowing that doctors can also use this tool during the operation. “For the moment, the Bambino Gesù is the only pediatric hospital in Europe to use it,” he proudly announces.

The expertise of the doctors together with these technological tools cannot however achieve the impossible, and the management of Bambino Gesù remains aware of its limits. “When there’s no possibility for the child to recover, we give the best of ourselves through empathy and prayer,” emphasizes Raponi.

The Vatican Hospital offers spiritual guidance for parents who are grieving. Raponi himself is committed to this long-term follow-up with families, and has even decided to involve certain families in reflecting on the hospital’s ethical charter.

In coming years, the pope’s hospital intends to continue to promote this openness to the world, which can only lead to progress. “It’s a question of giving and receiving more and more from others to reduce the suffering of patients,” he summarizes.

Already involved in more than 50 networks around the world to overcome rare diseases, the hospital does not intend to stop there and wants first and foremost to broaden its influence in terms of prevention with public authorities.

Read more:
When a baby’s diagnosis is grim, there is a path of hope