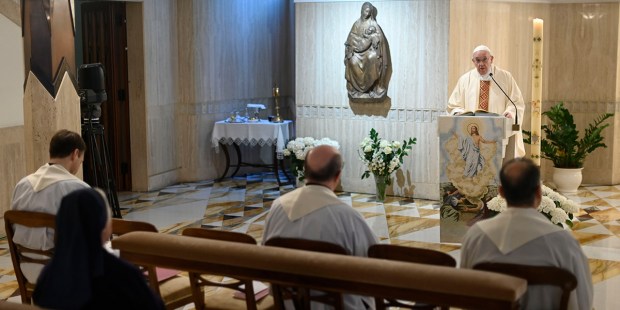 Vatican press office gives no details on Francis, but says health of all those who live at Santa Marta is constantly monitored.

A resident of the Casa Santa Marta, where Pope Francis lives, tested positive for Covid-19, according to the Holy See on October 17.

“The patient, asymptomatic for the moment, has been placed in isolation, just like those who have come into direct contact with him,” a press release stated, adding that the patient has temporarily moved out of Santa Marta.

The press office did not give any details on the pope’s health, but assured, “The health of all residents of the House is constantly monitored.”

The pope last Wednesday told pilgrims at the general audience that he could only greet them from a distance.

Read more:
Pope opts for greeting pilgrims at a distance

And on Thursday, a communique from the Swiss Guards noted that case numbers have increased among their ranks.

“As a result of testing carried out in recent days, seven other positive results have emerged among the Swiss Guards, bringing the total number of infected to eleven,” they reported.