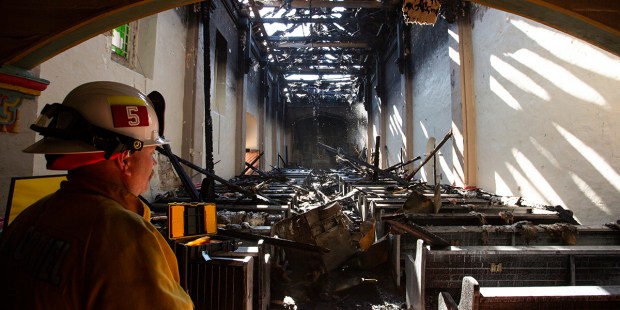 La Dolorosa was discovered amid the fire debris on the Feast of Our Lady of Sorrows.

As if to provide a celestial reaction to the fire that devastated a historic Los Angeles mission, the only artwork that survived was a painting of Our Lady of Sorrows.

The mournful painting was unearthed as workers cleared debris. They found the image to have only a few holes and blisters.

Not only that, the discovery happened on the feast of Our Lady of Sorrows, September 15.

When a centuries-old mysterious painting of “La Dolorosa” was pulled out of the rubble of the fire-wrecked Mission San Gabriel, workers were surprised. ⁠ ⁠ Even more surprising, it was the feast day of Our Lady of Sorrows (La Dolorosa). ⁠ ⁠ Read more about the miraculous discovery at the link in our bio!⁠

Historian and writer Gregory Orfalea explained what happened in an article for Angelus News, a publication of the Archdiocese of Los Angeles.

The July 11 fire is still under investigation, with the possibility that it was arson. Reconstruction, which the mission estimates will take a year, has not yet begun, as workers are still cleaning up.

Mission director Terri Huerta said there was damage to the walls, choir and altar, and the roof is “pretty much gone.”

Fortunately, most of the other artwork had already been removed when the fire occurred, as the mission, considered the birthplace of the City of Los Angeles, was undergoing a renovation in anticipation of its 250th anniversary next year.

That included an earlier painting of the “Dolorosa,” which made a deep impression on the Tongva Indians when it was displayed on August 15, 1771, as the Franciscans were founding Mission San Gabriel.

Though the fire in July was devastating, Huerta put it in perspective.

“We want Mission San Gabriel to be a place of healing,” she told Orfalea. “That we found ‘La Dolorosa’ in ashes but surviving on her own feast day, it’s encouraging! We have been on this journey at San Gabriel for a long time, first to renovate and improve the property for the jubilee celebration of 250 years, and now this tragic fire.”

Said Huerta, “The end result is that it is going to look more glorious.”