Saints who ministered to Indigenous Americans 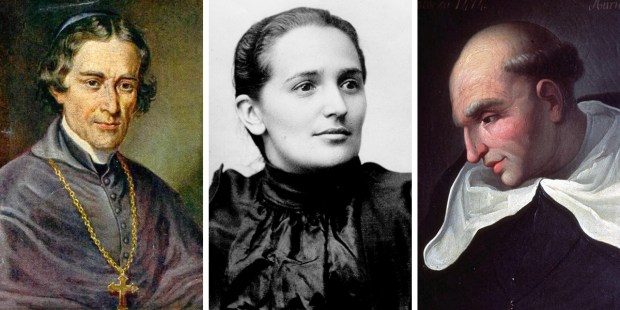 While sins were committed against native peoples, there were also those who gave their lives to them.

Historically, some acting in the name of the Church committed many wrongs against Indigenous Americans. Both Pope John Paul II and Pope Francis have apologized for the misdeeds of members of the Church; in 2015, Pope Francis said, “I humbly ask forgiveness, not only for the offenses of the Church herself, but also for crimes committed against the Native peoples during the so-called conquest of America … Many grave sins were committed against the Native people of America in the name of God.”

But there were holy men and women among the missionaries who served in the Americas, saints who honored the cultures of the people they encountered and sought to protect them (as best they could) from the violence and abuse they so often suffered at the hands of colonizers. They were fallen, imperfect men and women, but they fought for the rights of Native people and the preservation of all the good in their cultures.

May their witness inspire us to fight for justice, whatever it may cost us.

Blessed Maria Troncatti (1883-1969) was an Italian Salesian Sister who (after working as a nurse in World War I) spent 45 years evangelizing the Shuar people in Ecuador. Though she brought them Jesus, she also brought them modern medical techniques and trained them as nurses so they could care for themselves, even founding a nursing school for them.

St. Laura Montoya (1874-1949) was a Colombian woman who founded a religious order expressly to serve the Native peoples of Colombia. Rather than looking down on the people she served for their differences, Laura required that her Sisters live as the Indigenous people did and speak their languages. Though white Colombians were shocked that women would choose to live among the Indigenous people (and that they would travel into the jungle without any men to protect them), Mother Laura and her Sisters were unconcerned with popular opinion. Her work was physically debilitating and she used a wheelchair for the last nine years of her life, during which time she wrote to the Native people to whom she was a spiritual mother.

Venerable Frederic Baraga (1797-1868) was a Slovenian priest who became a missionary to the Midwestern United States. He was a scholar of Native American languages, writing a Chippewa dictionary both to aid in evangelization and to help the Chippewa pass their language down to their children. He also labored to protect the Indigenous people he served from being forcibly removed from their land by the United States government. When he was made bishop of Sault Ste. Marie, Michigan, he continued to serve his Indigenous flock alongside European immigrants. Bishop Baraga is best known as the Snowshoe Priest for his winter travels to be with his people; once he trekked 57 miles to baptize a young Native girl who was dying.

St. Antonio Vieira (1608-1697) was born in Portugal to a biracial father and a white mother; the family moved to Brazil when Antonio was six. He later entered the Jesuits and served as a priest in Brazil. He fought to end the enslavement of Native people and organized a system of missions to defend them from the colonizers’ abuses. He was opposed by both laity and clergy and eventually shipped back to Portugal to face the Inquisition, largely for his opposition to anti-Semitism; he spent two years in prison but was ultimately freed and allowed to return to Brazil.

St. Roque Gonzalez (1576-1628) was a Paraguayan Jesuit missionary to the Guaraní. He defended them from enslavers and from Spanish exploitation, fighting for their right to remain on their ancestral lands and govern themselves in reducciónes, which he founded as sovereign Guaraní land that the Spanish were forbidden to enter. Fr. Gonzalez embraced many of the Guaraní customs; on special feast days, Mass was followed by dancing, drums, games, and even fireworks. He insisted that Guaraní rather than Spanish be spoken on the reducciones. He was hated by many powerful Spaniards and by some Guaraní who resented his influence on the people. Ultimately, it was a Guaraní shaman who had him martyred.

St. Toribio of Mogrovejo (1538-1606) was a lay Spanish lawyer when the king recommended him as the new Archbishop of Lima. Though Toribio resisted, he was soon ordained a deacon, then a priest, then consecrated an archbishop two years later and sent to Peru. There he learned local languages and fought for the rights of Indigenous people, heading a local Church council that declared the Native people had all the same rights in the Church as Spaniards. He produced a catechism in Quechua and Aymara and exhorted priests to preach in Indigenous languages, requiring their study at the seminary he founded (the first seminary in the Western Hemisphere).

Servant of God Bartolomé de las Casas (1484-1566) was a Spanish priest who owned Native slaves for years after his ordination. He experienced a conversion from his anti-Native racism and worked for 50 years to end the enslavement of Native American peoples, advocating to the Spanish crown that they be permitted to rule themselves. He became a Dominican and eventually a bishop and dedicated his life to the fight for the protection of Indigenous and enslaved people, though his work destroyed his reputation and earned him accusations of treason and heresy.