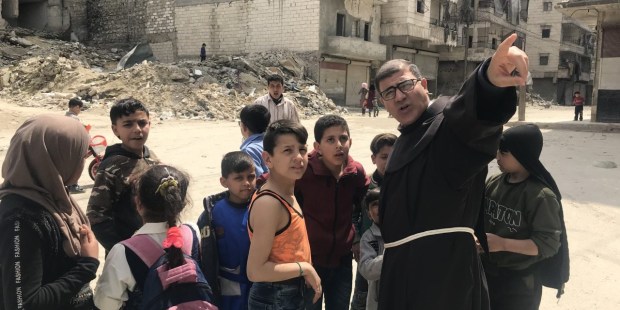 An estimated 300 Christian families in western Syria face persecution, violence and danger, even death, as their villages continue to be controlled by jihadist groups.

The villages of Knayeh and Yacobieh, in Idlib province, close to the Turkish border in western Syria, are still under the control of jihadist groups. Here fearsome Islamism still holds sway; Sharia, Islamic religious law, is in force; women are forced to wear veils, Christian properties have been confiscated and Christian symbols such as crosses have been torn down.

Among the local inhabitants who have remained despite the terrible situation, there are an estimated 300 Christian families of different denominations and ethnic groups. Two Franciscan friars, Luai Bsharat, aged 40, and 67-year-old Hanna Jallouf, have stayed on to minister to them.

The Christians remaining in these areas are facing persecution, violence and danger, even death. “In spite of the difficulties, Father Luai and Father Hanna have stayed on there because they believe that this region should not be abandoned. For it is close to Antioch, where St. Paul began his travels, spreading the Word of God,” explains Father Firas Lutfi OFM, who is Custodian of the Province of Saint Paul for the Franciscans of Syria, Lebanon and Jordan. He spoke with Aid to the Church in Need (ACN).

He continues: “Their sufferings began a decade ago. When the militant groups took control of the region and proclaimed the Islamic State, they confiscated Christian properties, imposed Islamic Sharia law on all non-Muslims and suppressed their right to move around freely within their own villages.”

Father Firas said that “those extremists have often persecuted, attacked, beaten, tortured and even murdered some of our brothers and sisters.” In one notorious case, Father François Murad was “beheaded in 2013,” and more recently, there was the case of “a female schoolteacher who was raped and then murdered in Yacoubieh.”

In his recent message, Father Firas stresses that the friars are there to help everyone in need of support and guidance, regardless of their religion, race, nationality or political opinions. “On many occasions,” he explains “the monasteries of Knayeh and Yacoubieh welcomed and gave shelter to dozens of Muslim families who were seeking refuge in the churches,” when the region became a battleground.

“The presence of the Franciscans is a sign of hope in the midst of the darkness and despair,” Father Firas said. They also depend heavily on whatever outside support they can obtain, especially financial support, since the local people can no longer harvest their own crops, which have been confiscated, or sell their own produce, leaving them in constant need of outside humanitarian aid.

ACN is currently supporting over 50 different projects to assist Christians in Syria. In addition to the emergency aid projects for vulnerable families in Aleppo and Damascus, the charity is also sponsoring several projects through Father Firas Lufti.

This article was first published by Aid to the Church in Need and is republished here with kind permission. To learn more about ACN and to help them in their mission to help persecuted Christians, visit www.churchinneed.org