The act of mercy in WWII that made former enemies “brothers” 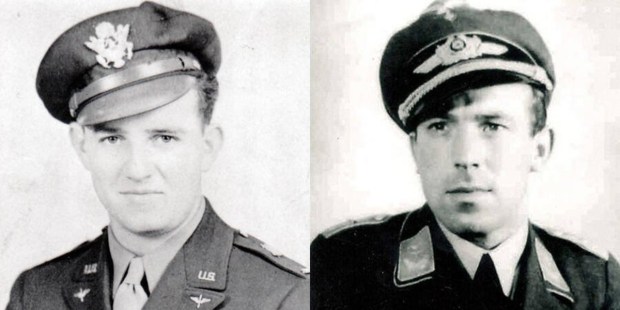 A German pilot lived to be thankful for his act of chivalry 50 years earlier.

Just before Christmas 1943, Charles Brown, an American bomber pilot in World War II, was sure he was about to die.

Brown was a 21-year-old West Virginia farm boy on his first combat mission, and it was going about as badly as you could imagine. Enemy fire had riddled his bomber with holes and nearly destroyed it. The men on board were in even worse shape than the plane: Half his crew was severely wounded, while the tail gunner was dead, his blood frozen in icicles over the machine guns.

Severely damaged, the plane couldn’t keep up and soon fell behind to fly alone. Somewhere over Germany, trying to make it home against all odds, Brown spotted the one thing that could make the desperate situation worse. A German Messerschmitt fighter plane was closing in on their crippled craft.

“My God, this is a nightmare,” gasped his co-pilot, Spencer “Pinky” Luke.

But the men had no way of knowing that the man flying that plane, Franz Stigler, came from a vocally anti-Nazi family. On top of that, Stigler was Catholic and had spent time studying to be a priest before the war. Stigler had not wanted to join the Fighter Corps and initially signed up only to train other pilots. But after his beloved brother, August, also a pilot, died in the war, Stigler finally agreed to go to the front, anger and resentment driving him.

That day, however, something deeper welled up inside him. He looked into the terrified eyes of young Charlie Brown and knew he could not gun down his plane.

Although he fought as a Nazi, Stigler believed deep down in a principle of wartime morality, which some call “the warrior’s code”: “There is something worse than death, and one of those things is to completely lose your humanity.”

Stigler saw that the men on the plane were utterly vulnerable and unable to defend themselves. To shoot them would be murder. Later, he said of the incident, “To me, it was just like they were in a parachute. I saw them and I couldn’t shoot them down.”

Alone with the crippled bomber, Stigler changed his mission. He nodded at the American pilot and began flying in formation so German anti-aircraft gunners on the ground wouldn’t shoot down the slow-moving bomber. (The Luftwaffe had B-17s of its own, shot down and rebuilt for secret missions and training.) Stigler escorted the bomber over the North Sea and took one last look at the American pilot. Then he saluted him, peeled his fighter away and returned to Germany. “Good luck,” Stigler said to himself. “You’re in God’s hands.”

Stigler’s act of mercy came at the expense of promotion and safety. An ace pilot, he only needed one more kill at that time to win The Knight’s Cross, Germany’s highest award for valor. Even worse, he put himself in significant danger: If anyone found out about the incident, he could be court-martialed, so he told no one about it for many years.

After the war, the two men moved on, both of them getting married and becoming fathers. Yet the unusual incident from all those years ago stuck in their memories. Decades later, Brown began having nightmares about it, and finally he couldn’t take it anymore: He had to find that pilot and know why he saved his life.

When nothing turned up through searching military archives and sharing the story at a pilots’ reunion, Brown tried a new tactic. He placed an ad in a German newsletter for former Luftwaffe pilots, telling the story and asking for information about the pilot.

On January 18, 1990, Brown finally received a letter, and it began, “Dear Charles, All these years I wondered what happened to the B-17, did she make it or not?”

Stigler had moved to Canada after the war and wanted to meet with Brown to talk about their encounter all those years ago. The men arranged to meet in the lobby of a Florida hotel, nearly 50 years after the incident that changed their lives.

After they finally met, their story became even more extraordinary. The two men became close friends, so much so that they came to refer to each other as “brothers” by the end of their lives. They took fishing trips together, flew cross-country to each other’s homes, and went on road trips to share their story at schools and veterans’ reunions. They talked about once a week and checked in on each other’s health regularly. Their wives became friends, too. And Brown’s nightmares went away.

Their deep friendship lasted for 18 years, until both men died in 2008. Once their story became widely known, two historians and writers, Adam Makos and Larry Alexander, undertook to write a book about Stigler and Brown, called A Higher Call. Makos stayed the night at Brown’s house before his death, and in Brown’s library, he noticed a book on German fighter jets that Stigler had given to Brown. Inside he read the following inscription:

In 1940, I lost my only brother as a night fighter. On the 20th of December, 4 days before Christmas, I had the chance to save a B-17 from her destruction, a plane so badly damaged it was a wonder that she was still flying.

The pilot, Charlie Brown, is for me, as precious as my brother was.

World War II took Stigler’s brother, but gave him another, 50 years later, in a way no one could have imagined. Despite the risk involved, Stigler lived to be deeply grateful that he made that act of chivalry.