“Help, my husband and our son are always fighting!”

Conflict naturally comes up from time to time in all relationships, but what can you do if it's becoming excessive?

As children grow up, relationships between family members can take difficult turns, and quickly affect the general climate in the home. If your husband and son are frequently butting heads, how should you react to their somewhat “warlike” relationship?

Accustomed to conflict-filled relationships within families, Gwenola Desombre, a marriage counselor in France, provides Aleteia with insight on the issue. She starts by qualifying the adverb “always,” which is sometimes used in an exaggerated way. “Conflicts aren’t constant; let’s also try to see everything that goes well in relationships,” she says.

The family: A whole system of relationships

Rather than getting stuck on this conflict, Desombre proposes reflecting on what this tension says about what’s happening in the family as a whole. Several scenarios are possible.

First of all, keep in mind that we’re not born parents: We become parents. In the process, we inevitably appeal to what we already know, which is our own relationship with our parents when we were children. Even if we’ve changed, matured, and made different decisions, our childhood and our experiences guide our roles as parents. They are our reference point.

A father called me once to explain that his son was unmanageable at the moment and asked if we could make an appointment. I’d given a talk the week before at the son’s high school, and he had indicated to his father that he was willing to come and see me. So I invited the parents to come with their son. The son arrived and sat down between his parents, and I asked him if he knew why he was there that day. ‘Yes, I know very well,’ he answered. ‘You’re a marriage counselor, right? You help people who have strained relationships? Then I’ll leave them to you. I’ll see you later.’ He got up and left me with his two parents, who had agreed to stay for a consultation, and did in fact have marital problems to solve …

Finally, parental or family relationships can be unbalanced by stress, professional tensions, and quarantine or lockdown. In these cases, the child may want to make himself present at the heart of this tension and find his place in a fragile balance. One conflict leads to another, the general atmosphere of the family becomes weighty for everyone, and the most urgent matter is to calm or repair the first link in the chain: the spouses.

Children need to be free to be themselves

The bond between a father and son often involves a certain rivalry, conscious or not. For the father, seeing his child grow up necessarily means seeing himself grow old at the same time. The son and the father may then enter into a kind of competition that is more or less implicit. The pressure grows on both sides and the societal cult of performance takes precedence, to the detriment of the rest.

Similarly, it’s fascinating to discern the notion of a parent living vicariously through a child, often found in the mother-daughter relationship too. There are legitimate expectations that one can have for one’s child, whether at school, in sports or in relationships, but these can’t come at the expense of the full-fledged person who is developing, the child or adolescent who is not and cannot be a copy of his parent.

The son may have capacities, aspirations, or a temperament that differ from those of his father. It’s fundamental that we accept these differences in order to clearly distinguish between what is essential, like values that are important to us, and our own desires and dreams. When that distinction is clear, a father who is passionate about tennis could then be happy to see his son excel in music, for example. Heredity isn’t cloning; a child isn’t born to satisfy his parents’ unfulfilled dreams.

Educate in truth … and in deeds!

Gwenola Desombre also stresses the importance of education in the use of freedom. Explaining our reasoning to our children makes them much more understanding of our rules and willing to comply. She says,

A child doesn’t necessarily understand all the aspects of an obligation, and good communication can change everything. Leaving too much implicit requires the child to guess our expectations and intentions: Explaining to them the reasons for a rule or a prohibition can enable them to accept it better.

A young child, just as much as a teenager, needs to be able to express himself or herself in the heart of his or her family.

A father is his son’s first role model. “A young person learns by example,” the counselor reminds us. The famous saying, “Do as I say but not as I do,” isn’t an effective way to educate a child. A simple example is cell phone use. If the father looks at his smartphone during family dinner, or systematically leaves the table to answer calls, no matter how important they are, the son will probably find it difficult to leave his own phone aside. The rules must be consistent for everyone, while taking into account the difference in parent/child status.

Should I intervene in the tensions between my husband and our child?

This recommendation points the mother to the unique role she plays in the family and the place she gives her husband in the family. Little phrases such as “Just wait until your father gets home!” reveal delegation of authority to the husband, and can undermine the father-son relationship.

The father may want a place in the more relaxed spheres of leisure or conversation with his son, a relationship other than that of perpetual authority. The roles of each parent should be discussed regularly between them as the children grow up. The couple as parents is the fruit of the couple as spouses, so it’s vitally important to take care of the marriage and nourish it to the maximum, without focusing excessively on the parent-child conflict.

If the conflicts persist, outside help can be invaluable, such as from a psychologist, therapist or marital counselor. There are many resources available that can help calm the atmosphere of the whole family. Accepting help and guidance can be a beautiful model of humility for our children.

Working through conflicts helps us grow

A father grows as a parent as his child grows up. There’s no perfect model; every father has to adapt his way of parenting to the child in front of him, often with a mixture of admiration, imitation, and sometimes fear. The pressure shouldn’t be too heavy on either the adult’s or the child’s shoulders.

Conflict is not necessarily negative if it leads to positive change and a peaceful resolution. The key—as in many other situations—is good communication and taking into account the individuality of each person. The complexity of each person contributes to making this educational task as difficult as it is exciting.

Read more:
Why it’s a blessing for children to know that their father goes to confession

A father’s role in the family is vitally important. Check out these inspiring quotes from Pope Francis about fatherhood to be renewed in your vocation. 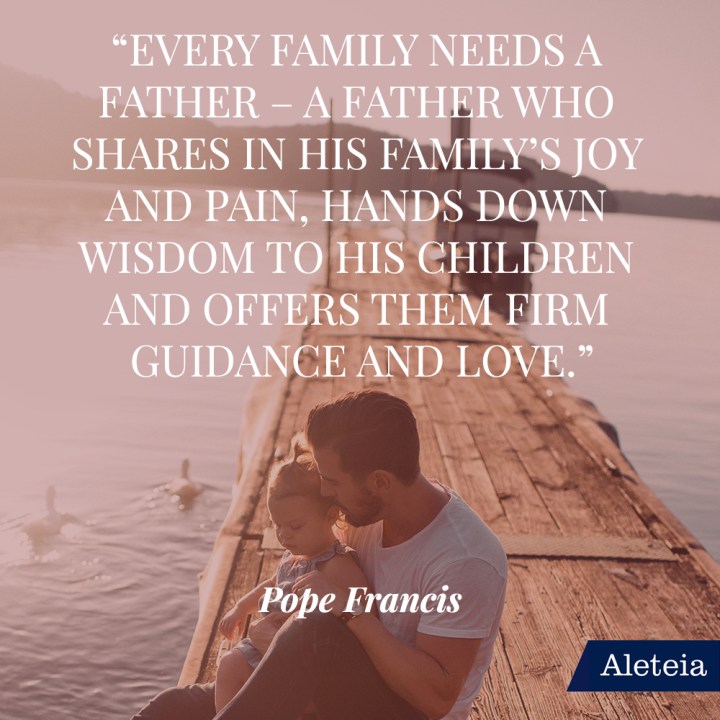