How did the Holy House of Mary get to Loreto, Italy?

Modern research suggests that the Holy House, like many relics from the Holy Land, may have been transported by ship at the conclusion of the Crusades. I

Behold, I am the handmaid of the Lord. May it be done to me according to your word.

Since 2014, my family and I have lived in Loreto, Italy, a picturesque hill town in the central Italian region of the Marches. Famed throughout the world for the Holy House of Mary, Loreto has been an important pilgrimage destination for nearly eight centuries.

This year is a particularly poignant time, as a Jubilee is underway to commemorate the 100th anniversary of the papal proclamation of Our Lady of Loreto as the patroness of aviators. The reason the pope made the Virgin of Loreto the protectress of pilots has an interesting history, as does the conviction that the stones preserved here were part of Mary’s house.

The Holy House of Loreto comprises three walls of stacked stones and is safeguarded beneath an ornate Renaissance-era basilica. It is believed that Mary grew up in this house and that the Annunciation took place in it.

Of course Mary’s house should be in Israel’s Galilee region. Indeed, in Nazareth today, there is another basilica – that of the Annunciation – built over a grotto where it is believed Mary grew up and was visited by the Archangel Gabriel. Today’s Nazareth basilica is the largest church in the Middle East. Testifying to the ancient and enduring belief that this was the site of Mary’s house and Annunciation are the remnants of four earlier churches within it: a 3rd-century synagogal basilica, a 5th-century Byzantine basilica, a crusader church from the 12th century, and another one built by the Franciscans in the 18th century. This last one was expanded into the current basilica, consecrated as recently as 1969.

So, how did the walls get to Loreto? For many centuries, tradition held that angels miraculously carried the Holy House from Nazareth to Loreto. Throughout the basilica are numerous artistic depictions of angels flying over the seas with the house. For this reason, at the request of pilots returning home after World War I, Pope Benedict XV declared Our Lady of Loreto as the patroness of pilots and airmen on March 24, 1920.

Yet, modern research suggests that the Holy House, like many relics from the Holy Land, may have been transported by ship at the conclusion of the Crusades. In the early 1900s, a priest and papal archivist was going through Vatican documents when he came upon a record detailing items that were brought out of the Holy Land during the Crusades. He discovered that a Greek merchant with the surname Angelos paid crusaders to move the house to Italy as part of a wedding dowry for his daughter, who was betrothed to a nobleman from Taranto. Some suggest that the etymological roots of his name led to the tradition of the “Angels” bringing the house to Italy.

In either case, according to tradition the Holy House arrived in Loreto during the night between December 9-10, 1294, and was placed next to a road among a field of laurel trees. The Latin word for laurel is lauretum, which became Loreto in Italian.

Though there is no way to prove how the house arrived in Loreto, there is plenty of evidence to demonstrate that the walls are from the Nazareth basilica.

Though there is no way to prove how the house arrived in Loreto, there is plenty of evidence to demonstrate that the walls are from the Nazareth basilica. The most convincing evidence is the discovery of ancient Christian and Marian graffiti markings on the Loreto walls similar to those found in ancient Judeo-Christian churches in Palestine. There is one virtually identical mark, in fact, on one of the Loreto walls as well as in the Nazareth grotto.

Today inside the Holy House of Loreto is the famous statue of the Black Madonna. Sculpted in cedar of Lebanon, it was created in the likeness of an ancient icon of Mary that was once displayed in the same niche and is believed to have been painted by St. Luke. Also in the Holy House is an ancient altar called the “Altar of the Apostles.”

Over the centuries, countless pilgrims have visited Loreto, including many saints. There have also been numerous miracles and conversions. Testifying to graces received are displays of gifts and “ex-voto” medals given to the church by the faithful out of gratitude for blessings received through the intercession of Our Lady of Loreto. To this day, a commission of doctors meets periodically in Loreto to review reports of miraculous healings.

The feast of the “Translation (ceremonial moving from one place to another) of the Holy House” is celebrated on December 10. 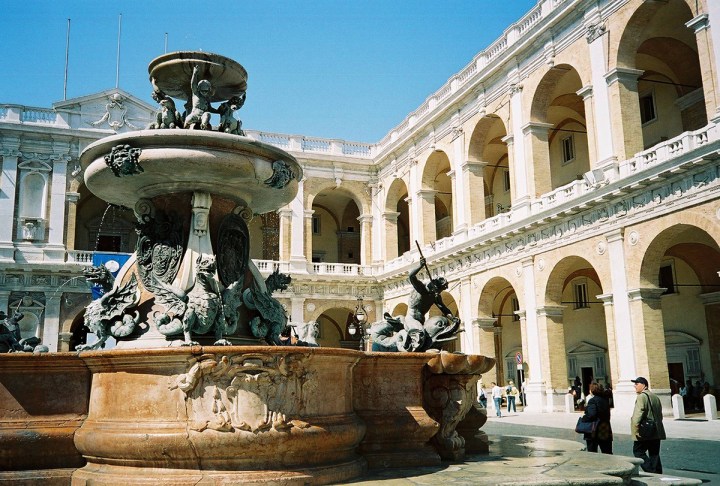