The story of a millennial nun: The unlikely journey of a Rutgers business major to religious life

The heart of her discernment was a simple question, "Who is God? Who is my Father?"

“I’d never even met a Sister until going to Rutgers University …” Not exactly the words you’d expect to hear from a young woman who recently professed her vows in religious life at St. Peter the Apostle University and Parish Church.

Rutgers is a lot of things, but Catholic isn’t one of them.

As one of the nation’s oldest higher learning institutions, it’s progressed from being a small school above a tavern in 1771 to boasting a 40,000-strong student body on a sprawling 2,200-acre campus that competes in the rarefied air of the Big Ten Conference.

But within the campus’ hundreds of clubs and organizations, a powerful Catholic presence can be found. The Catholic Student Association [CSA] at Rutgers provides a robust campus ministry program to support students’ faith lives as they navigate the stormy college years.

Br. Patrick Reilly BH, director of the Association, explains, “Our team is out there … to bring someone to a lifelong relationship with Jesus and with that, to the Church.” And beyond working day in and day out with students, “We have two seminarians now, one studying for the Oratory the other for the Diocese … and we have one other girl who joined the TRR Sisters who also made her first vows … there’s a number of vocations that have come through.”

In 2012 Anna Palka arrived as a freshman Business major at Rutgers. She was raised in a Catholic home, with two older brothers, and survived 12 years of public education. Faith had always played an essential role in life, and she participated in her parish choir and youth group. But now, in this alien environment, she would have to find a way to live her faith away from her family, parish, and home.

As the chaos of college life began to mount, she literally made a resolution, “I had heard about CSA [Catholic Students Association]. And the only New Year’s Resolution I ever kept in my life was my resolution for 2012. I said, ‘I’m going to go to a meeting.'”

And with that, she discovered a new Catholic home away from home. “I went to one Bible Study my spring semester, and I met people my age who knew Scripture, and I was like, ‘People do this who are my age? People are into this?’ So I came around more and more, really my sophomore year, and I dove headfirst into everything that CSA had to offer.” And it was there that she encountered a religious Sister for the first time in her life.

“They were so joyful and so loving to everyone, and there was a freedom within them that was very attractive.”

The Sisters of Jesus Our Hope, established in 1992 in the Diocese of Metuchen, are an essential part of Rutgers’ campus ministry. “Young people hunger for stability, truth, and love,” explained vocations director Sister Christine Quense SJH. “Our Sisters have found that now more than ever, they want someone to speak the Truth to them because life has been so uncertain for them. And when they start to learn about who Jesus is and come to know Him and establish a prayer life — which is a great work of the Sisters helping to build a prayer life and a Sacramental life — their lives are changed radically.”

The long and winding road of discernment

The notion of discernment was new to Anna as well, “At a talk, a married couple shared the story of their vocation, and they both used this phrase ‘I discerned my vocation’ … and I thought, ‘I’ve never heard those two words used in a sentence before in my life! What are they talking about? Is there a class for that?'”

With the Sisters and her spiritual director’s support, she began to contemplate what future she was being called to. Having always regarded marriage as the default, new questions arose, along with an openness to accept whatever God’s Will was for her in life. “If He has another plan for me, I can trust whatever that is. Because I knew it was good, I knew it was from Him.”

According to Sister Anna, the heart of her discernment was a simple question, “Who is God? Who is my Father? Who is calling me to this vocation? Who is Jesus? If one’s vocation is to be His spouse, well, who is He? You have to know who you are marrying, ya know?”

Which led her to another question, “Who am I? Who did God create me to be? And how did He create me to Love in this life?”

And then, of course, the eternal, “God, what do you want me to do! (laughter) Which some days, it seemed like that question would never end!”

After graduation, she embarked on a year-long missionary program with St. Paul’s Outreach at the University of Orlando. St. Paul’s Outreach is a campus ministry program that aims to evangelize in college settings. And returning to New Jersey, she came to peace in her decision “This is right, I’m ready for this, I know that this is what God is calling me to.”

And on the 8th day of September, on the Feast of the Nativity of the Blessed Virgin Mary, in Rutgers’ shadow, at the University church of St. Peter the Apostle where her journey first began, she professed her vows.

From the quiet whisper that welled up within her, drawing her soul’s eyes towards Heaven, came a proposal to a love Divine.

A proposal that she lovingly embraced.

Today she graces Rutgers’ halls not as a student but as a witness — a witness of Faith, a witness of Hope, and a testament to His Love.

What would seem an improbable outcome from this setting came a religious Sister. Because nothing is impossible for God, especially when someone cooperates with His grace.

And so, the Business degree she pursued at Rutgers led to something greater. The business of being a Sister. 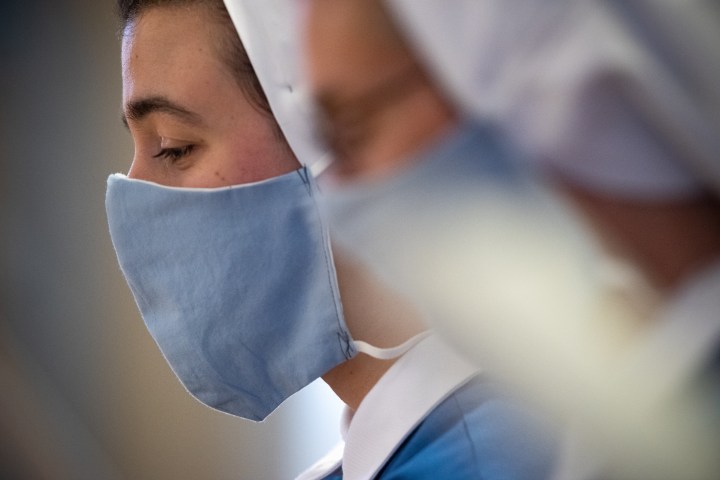