Pope urges 13 new cardinals to make sure they choose Jesus’ road, not a worldly one

11 of the 13 were able to visit Pope Emeritus Benedict XVI for his blessing. 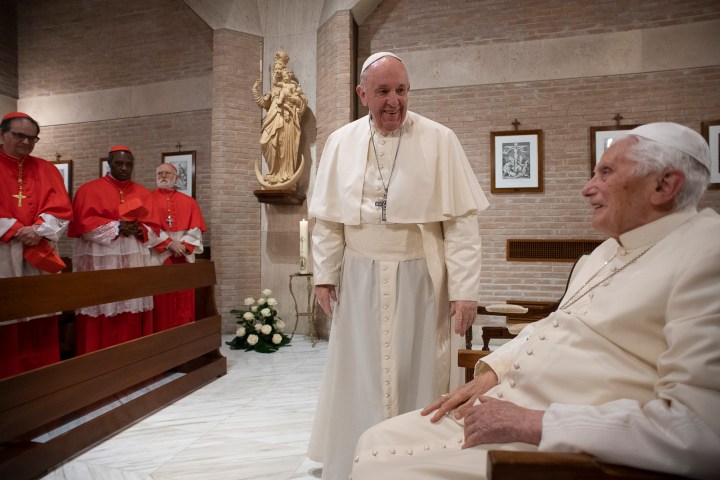 Pope Francis on Saturday created 13 new cardinals who come from eight nations of the world.  He shared a reflection before bestowing on them the cardinal’s birretta (red hat), the ring and the title.

He commented on a passage from Mark’s Gospel where Jesus speaks about his humiliation, passion, death and resurrection while approaching Jerusalem. Meanwhile, James and John urge Jesus for a place of privilege when He is in glory.  But Jesus tells the two brothers they must first be ready to suffer and be a servant of others like the Son of Man.

The Pope said that the road to Jerusalem is the road of life and salvation, which is travelled with Christ and which leads to the paschal mystery of Jesus. “The cross and the resurrection are part of our history; they are our ‘today’ but also and always the goal of our journey.”

Jesus, who is not indifferent to the amazement and fear of his disciples, prepares them for the trials to come so that they could always be with Him on His road.

James and John, he said, instead want to take “not Jesus’ road, but a different one.”

“All of us love Jesus, all of us want to follow him,” the Pope said, “yet we must always be careful to remain on the road.”

“Our bodies can be with him, but our hearts can wander far afield and so lead us off the road.”

Thinking about the “many types of corruption in priestly life,” the Pope said, “the scarlet of a Cardinal’s robes, which is the color of blood, can, for a worldly spirit, become the color of a secular ‘eminence’.”

Such a person, he warned, “will no longer be the pastor close to the people.”

“You will feel that you are only ’eminence’. When you feel that, you are off the road,” of the Lord.

Visit to the Pope Emeritus

They met the Pope Emeritus in the chapel of his residence, in what a Vatican press office described as an “atmosphere of affection,” during which the cardinals were introduced individually to the Pope Emeritus.

The statement also said that Benedict XVI expressed his joy for the visit and, after the recitation of the “Salve Regina” blessed them.

The visit to the Mater Ecclesiae monastery in the Vatican has become a tradition since the Consistory of 2016. On the first two of Pope Francis’ consistories, in 2014 and 2015, the Pope Emeritus took part in the celebration in St. Peter’s Basilica.

During the consistory — the seventh of Francis’ pontificate — the cardinals-designate professed the creed together and approached Pope Francis one by one, for him to place the red biretta on each one of them, giving them the cardinal’s ring and the title and rank.

The consistory of November 28 has taken place in an extraordinary time.  Given the growing number of Covid-19 infections worldwide and the mandatory health protocols, the consistory had a limited congregation. Each new cardinal was allowed only a few guests or family members.

Because of the health emergency, Asia’s two new cardinals, Bishop Cornelius, Apostolic Vicar of Brunei, and Archbishop Jose Advincula of Capiz, Philippines, were unable to come to Rome for the consistory.  They followed the ceremony that was streamed live from the Vatican. They will be handed their biretta, ring and title later in their respective countries.

Four of the new cardinals are above 80 years of age and hence are not eligible to vote for a new pope in the case of a conclave.

With the consistory of November 28, the total number of cardinals in the world rises to 229, of which 101 are 80 or above.